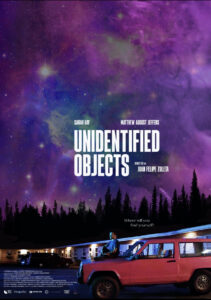 Jeffers) a flamboyant, misanthropic dwarf hiding from the world in his shabby New York City apartment. But an unexpected visit from his upbeat—and possibly unhinged—neighbor Winona (Sarah Jay) forces him out of his shell and onto an impromptu road trip. Their destination? What she believes to be the site of an upcoming alien visitation in the wilderness of rural Canada. On their increasingly-surreal odyssey, Peter and Winona will encounter bickering lesbian cosplayers, shroom-addled survivalists, and even extraterrestrial highway cops. But the further they go and the more their trauma

comes to light, it becomes clear that the only thing more nerve-wracking than being abducted is being alone in the universe. UNIDENTIFIED OBJECTS Director Juan Felipe Zuleta joins us to talk about his revelatory road trip story connecting

two very different people with little in common, except a gnawing sense of not belonging. Funny, sad, poignant, and fatalistically cosmic, Zuleta creates the space for two superb performances from Matthew August Jeffers (New Amsterdam, Marvelous Mrs. Maisel) and Sarah Jay (Golden Globe nominee, Flesh & Bone) in his beguiling tale of finding one’s place in this world and beyond.

For updates and screenings go to: unidentifiedobjectsfilm.com

About the filmmaker – Director Juan Felipe Zuleta is a Colombian film-maker based in New York City. Starting his career at NYU, he has directed content for brands like Comcast, Budweiser, and Major League Baseball, as well as music videos for top artists like multi-platinum star Russ. He studied at NYU’s Tisch School of the Arts (‘16) before becoming one of the youngest-ever in-house directors at Eva Nosidam following graduation. His creative honors include support from the Richard Vague Production Fund, a Cannes Silver Lion, and being shortlisted as a Cannes Young Director. Juan’s second feature film project was accepted into the Frontières International Co-Production Market.

“It’s that serious approach to the two characters internal struggles that helps push the narrative along, while asking us to walk in these characters shoes, and maybe believe them for what may seem like grand illusions.” – Leo Brady, AMovieGuy.com

“Anchored by lovely performances by Matthew Jeffers and Sarah Hay, the film, with its misleading title, is one that is well worth the watch.” – Mae Abdulbaki, Screen Rant

“Unidentified Objects captures feeling like an alien, an outsider in this world that judges based on appearance, its toll, and the beauty of self-acceptance.” – DarkSkyLady, DarkSkyLady Reviews