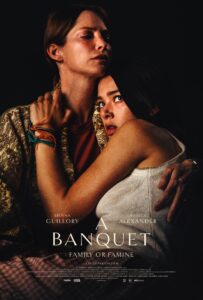 teenage daughter Betsey (Jessica Alexander) experiences a profound enlightenment and insists that her body is no longer her own, but in service to a higher power. But despite her refusal to eat, Betsey loses no weight and gains a growing faith in her newfound and enigmatic sense of purpose. At first, her condition is suspected to be an act of adolescent  rebellion or a psychological break. As her daughter’s personality is further subsumed by this affliction, Holly finds herself confronting the boundaries of her own beliefs and the repressed traumas of her past. In an agonizing dilemma, torn between love and 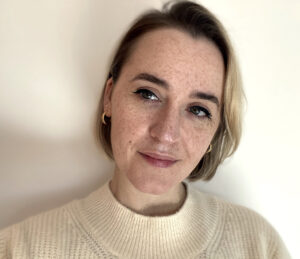 fear, Holly is forced to confront the boundaries of her own beliefs. Combined with stylish photography pervaded by grotesque culinary close-ups and

subtle forays into nightmarish surrealism, A BANQUET is a disquieting feast with images and ideas that leave a potent and lingering aftertaste. Director Ruth Paxton (Be Still My Beating Heart, Stay Awake, Pulse) stops by to talk about A BANQUET’s literary and cinematic inspiration, the exceptional cast of actors who help make the film resonate and the satisfaction that comes with completing her debut feature film.

For updates and screenings go to: abanquetmovie.com

In theatres February 18, go to: abanquetmovie.com/tickets

About the filmmaker – Ruth Paxton is a Scottish filmmaker who graduated in 2007 with an MA in Film and TV from Screen Academy Scotland having gained her honours degree at Edinburgh College of Art. Her award-winning shorts have been exhibited and nominated in competition at numerous international events and prominent film festivals. Winner of Best Woman Director at the 12th London Short Film Festival for her film PULSE, and nominated one of Canongate Books 40 Scottish Storytellers of The Future; artists anticipated to dominate the next 40 years of creative life in Scotland. In 2019 Screen Daily featured her as one of ‘Six emerging Scotland based Directors you need to know.’ A BANQUET is Ruth’s debut feature, a psychological horror produced by Tea Shop Productions and Riverstone Pictures. The film is represented by HanWay Films, and was recently acquired by IFC Films for North America. It was selected for the Great 8 showcase at Cannes Marche presented by BFI, BBC Films and the British Council, and will have its World Premiere at Toronto International Film Festival 2021, in the Discovery section. More films at: vimeo.com/ruthpaxton

“As a world-building exercise A Banquet is fearless in how it weaves themes of grief, identity, care and faith together into an elaborate portrait of three women bound together by crisis” – Alexandra Heller-Nicholas,

“A provocative, rigorously composed film that confirms Paxton as a singular talent after a string of award-winning shorts.” – Allan Hunter, Screen International

“It’s a surprising, unnerving exploration into the psychological power of food, the intensity of maternal love, and the mystery of life and death – three things you don’t expect from one film.” Cassondra Feltus, Black Girl Nerds