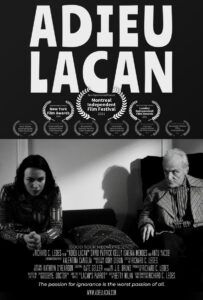 own path to motherhood has reached an unbearable impasse. Jacques Lacan, the controversial French psychoanalyst who is widely recognized as one of the most important intellectuals of the 20th Century, is portrayed by David Patrick Kelly (John Wick, Twin Peaks), who profoundly illuminates the psychoanalyst’s passion for his work. Ismenia Mendes (Orange is the New Black) plays Seriema, the character based on author Betty Milan, whose youth and adherence to the truth of her own experience as a young woman make the encounter between analyst and patient a tempestuous one.  According to Lacan the analyst is in the position

theory of what the filmmaker called a “macguffin,” the central motivating cause of a plot—like the Maltese Falcon in Huston’s film by the same name—that’s only real value is given to it by its place in the plot as a mystery to be solved and not by any intrinsic quality of its own. Director. producer and writer Richard C. Ledes joins us to talk about his bold take on the philosophy and methods of a Lacan and why he chose to frame Lacan’s story in a stark but highly cinematic presentation.

For updates and screenings go to: adieulacan.com

The film will be distributed by Passion River Films, and will be released on VOD on May 10, 2022 on several platforms including iTunes, Amazon and Vimeo. For more information about the film visit www.adieulacan.com.

About the filmmaker – Producer, writer and director Richard C. Ledes named after her father, a judge in Baltimore, who died of sadness a few months after his son, the schizophrenic, was hit by a train. His first feature film A HOLE IN ONE, set in 1953, starring Michelle Williams, about a woman who wants a lobotomy, originated in a piece of performance art that Ledes based on the psychiatric records of his maternal uncle. He made A HOLE IN ONE after completing a doctorate in comparative literature at NYU. Much of his research for the film derived from the research he did for his dissertation; it was on the cultural traces of the rise of mental healthcare in the U.S. around treating veterans after WWII. His recently completed film ADIEU LACAN, starring David Patrick Kelly and Ismenia Mendes, is based on the play “Goodbye Doctor” and the novel “Lacan’s Parrot” both by Betty Milan. ADIEU LACAN is the story of the struggle of a young woman to understand, through a psychoanalysis with the French psychoanalyst Jacques Lacan, why her own path to motherhood has reached an unbearable impasse. His latest film IKONOPHILE Z, “a light romantic comedy about the extinction of all life on earth,” is currently in post-production. Additionally he is in development on VIENNA 1913, based on a play by the same name written by the late renowned French psychoanalyst and playwright Alain Didier-Weill. Ledes’ film FRED WON’T MOVE OUT was named by the BFI (British Film Institute) as one of the 10 essential films of legendary actor Elliott Gould (MASH, THE LONG GOODBYE). Ledes’ film THE CALLER won Best NY Narrative Feature at the Tribeca Film Festival. Ledes is also the only translator of William Burroughs into English (Burroughs did a series of interviews in France that were published in French; the original recordings were lost; for a collection of the work of Burroughs published by Semiotexte, Ledes translated the French translations back into English). For more go to: richardledes.com

“A gem of a film; in my opinion a true masterpiece that so gently, subtly and accurately portrays an analytic treatment, and more specifically a treatment that proceeds along the lines of a Lacanian cure.”-  Mavis Himes, Psychoanalyst and author of “The Power of Names.”

“The film is born immediately as a classic and from now on it will be absolutely necessary for people in training to see the film.”- Mario Eduardo Costa Pereira, Corpo Freudiano do Rio de Janeiro

“The closest thing to having met Lacan himself. From now on, a film which can’t be missed for whoever undergoes psychoanalytic training!”- Diego Zanelli

“Adieu Lacan”. It is awesome and evokes admiration through many aspects – great actors, characters as well as the truly presented analysand-analyst bond and of course the image of Lacan. I am impressed by the contrast between the emergence of Seriema’s desire and the last Lacan’s years. Thank you for such an unforgettable experience!” – Yordana Hristozova | Bulgaria