Deborah Anderson’s WOMEN OF THE WHITE BUFFALO takes a comprehensive 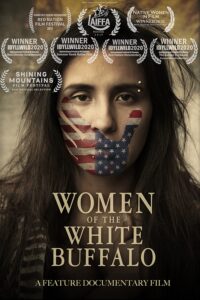 look at the ancient, Native, and matriarchal Lakota nation, a community that has been upended by centuries of genocide and colonialism. This sustained assault has resulted in a culturally sabotaged and isolated people that are in a constant struggle to save what remains of their sacred identity. The Lakota women living on the Pine Ridge and Rosebud Indian Reservations in South Dakota, are rising up against the forces that continue to suppress them. By preserving and protecting their ancestral values and wisdom, they provide a source of hope to their people. With exclusive access to the lives of 9 women, ranging in

age from 10 to 98, we explore powerful testimonials of loss and survival as we gain insight into the experience of a modern day Indigenous American living on an Indian Reservation. Gripping historical

accounts and startling timely statistics guide viewers down the path that has led to these present day conditions. The indelible voices of these determined women inspire us with their strength, gifting us with ancient insights that speak to our current global, environmental and cultural crises. These are the powerfully rich stories of the brave women and children living in the poorest county in the United States. Director Deborah Anderson takes us along as we listen to their stories of loss, suicide, murder and epidemic meth addiction amongst their community, mirrored by their deep ancestral roots, traditional ceremony, prayer and hope.

For news and screenings go to: womenofthewhitebuffalo.com

About the filmmaker – Award winning filmmaker and photographer, Deborah Anderson’s work has graced the covers of pop music albums and magazines, as well as the walls of an expansive clientele of private homes and landmark hotels worldwide. Of Indigenous, Black, Irish and Scottish descent, her photographic work has hung in galleries both in Europe and the US, including the world-class Leica Galleries who have hosted three shows for her “Women Of The White Buffalo” series. Her first feature documentary film project AROUSED included a fine art photographic book was theatrically released reaching #3 on iTunes’ documentary most viewed list and was featured on Showtime and Amazon Video. Deborah has released three fine art coffee table books to date and has created short films and music videos for various celebrated artists. Having created “MY REVOLUTION” with award-winning writer and activist (Vagina Monologues author) Eve Ensler, along with the voice of actress Rosario Dawson and the short film RISE with Thandie Newton for the One Billion Rising organization.

“The film is part lament and part tribute, honoring the legacy of women who today — had American progress been less relentless or thoughtless — might be leading a thriving nation of Indigenous people, rather than fighting to keep their communities alive.” – Noel Murray, Los Angeles Times

“Though the film lacks a clear narrative arc, put together, these stories draw a line between the historical genocide and displacement suffered by Indigenous people and the present destitution on reservations.” – Concepción de León, New York Times

“Women of the White Buffalo is a major triumph from a multi-talented artist. It may be grueling at times, but it is one of the best visions of something unseen released yet.” – Michael Talbot-Haynes, Film Threat

“…has a lot to teach and a film that really delves deep into its subject, letting the women at the center of everything really speak about what is affecting them and how they are managing to help one another as much as they can.” – Emilie Black, Cinema Crazed