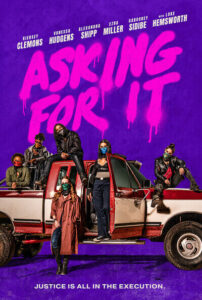 Clemons) in the aftermath of a sexual assault by her old friend Mike (Casey Cott). Joey befriends mysterious stranger Regina (Alexandra Shipp) who introduces her to The Cherry Bombers, an all femme gang including Beatrice (Vanessa Hudgens), Lily (Leslie Stratton), Sal (Radha Mitchell), Jett (Leyna Bloom), Angie (Lisa Yaro), Fala (Casey Camp-Horinek), and Rudy (Gabourey Sidibe). The Cherry Bombers, all suffering from their own past traumas, have come together to fight a seek some measure of justice in

Mark Vanderhill (Ezra Miller). As Joey is drawn further into their chaotic world, Sal’s old flame, Logan County Sheriff Vernon (Luke Hemsworth), investigates MFM, leading to a thrilling showdown. Together the Cherry Bombers strive to take down a society overpowered by corrupt men and seek the ultimate revenge while getting their own version of justice. Director Eamon O’Rourke stops by to talk about the inspiration for the story behind his directorial debut, inverting the male-dominant “action” film tropes and assembling a cast of established and up and coming terrific actors.

Watch at: Amazon.com/Asking For It

“Careful casting is equally essential to balance any heavy-handedness, and Clemons, Shipp, and Mitchell in particular flood the screen with charisma.” – Elizabeth Weitzman, TheWrap