Life-affirming and profound, BEAUTIFUL SOMETHING LEFT BEHIND 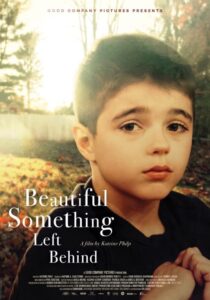 beautifully captures the heartbreaking, mundane and even the funny moments in the lives of several young children who have recently lost one or both parents. The Good Grief community in New Jersey focuses on a holistic approach to mourning, where children can give in to rage in ‘the volcano room’ or say goodbye to a dying teddy bear patient in ‘the hospital room.’ Over the course of a year, we get close to Kimmy, Nicky, Peter, Nora, Nolan and Mikayla along with their constant companion: grief, as they attend their weekly group meetings at Good Grief, practice small rituals to

remember their loved ones, and go about the daily work of living. Filmmaker Katrine Philp keeps the camera and the point-of-view firmly on the children and while it is sometimes deeply sad, it’s also at times humorous to experience questions about life and death through their open and curious minds. Director Katrine Philp joins us to talk about gaining the trust of the Good Grief community, the unfettered way the children interact with one another, the loss of her own father during the making of Something Beautiful and how all of it informed the making of the film.

For news and updates go to: goodcompanypictures.com/beautiful-something-left-behind

About the filmmaker – Katrine Philp is an award-winning director who graduated from The National Film School of Denmark in 2009. Her first film, ‘Book of Miri’, was awarded the President´s Award at the Full Frame Documentary Film Festival, nominated at IDFA and won the European Young CIVIS Media Prize in Germany. In 2014 Katrine won the Audience Award at the American Documentary Film Festival for her debut feature length documentary ‘Dance For Me’ which was also selected for POV on PBS in 2014.  The film was also nominated for an Emmy Award in the category ‘Outstanding Arts and Culture Programming’ 2015. She directed ‘Home Sweet Home’ in 2015 – produced with Good Company Pictures (Winner of the Danish Film Academy’s Award 2016 for Best Short Documentary, IDFA, TIFF Kids), then ‘False Confessions’ in 2018 (award Winner at CPH:DOX, Nominated as best Nordic Documentary at Nordic Panorama, winner of Special Jury Prize at LA film festival. TV2 prime time). Beautiful Something Left Behind is her latest film which won the Grand Jury Prize at SXSW 2020. To find out more go to:  goodcompanypictures.com/katrine-philp

“Beautiful Something Left Behind” is a simple, elegant documentary about children coping with… heartbreaking loss, at a facility designed especially for them.” – Glenn Kenny, New York Times

“There are no manufactured moments of intense grief, just the day-to-day activities of parents, caregivers, and children doing their best to move on from the trauma they’ve experienced.” – Audrey Fox, JumpCut Online