In Central America, a caravan of migrants seeking a better life heads north to 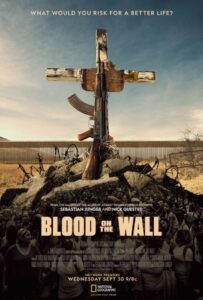 the United States, as narco-traffickers — part of the cause for the caravan — move drugs and money back and forth across the same border. From Academy Award-nominated director Sebastian Junger and Emmy-winning producer Nick Quested, BLOOD ON THE WALL explores the depths of corruption plaguing Mexico and Central America and the policies of the past that have made it impossible for everyday people to find justice. Filmed in 2018 and 2019, just as the caravans made international news, BLOOD ON THE WALL is both intimate and wide-ranging as it follows a 17-year-old journeying

from Honduras, a mother and daughter and their family trying to make the life-threatening trek easier for their kids, and smugglers and traffickers who reveal what set them on their own path. Using the same on-the-

ground journalism and granular point of view that co-directors Sebastian Junger and Nick Quested used in Hell on Earth: The Fall of Syria and the Rise of ISIS, Korengal, and the Oscar-nominated Restrepo, BLOOD ON THE WALL brings the humanity of the migrants to the forefront and untangles how politics, the drug trade, violence, and the desire for safety result in unbelievable anguish happening in plain sight. Co-director Nick Quested joins us to talk about the extraordinarily violent and unstable circumstance these immigrants navigate and the palpable sense of cynical betrayal that the US and Mexico deploy against them.

For news, screenings and updates go to: nationalgeographic.com/blood-on-the-wall

About the filmmaker – Co-director Nick Quested is executive director and owner of Goldcrest Films, where he has built one of the premiere documentary brands in the world, winning two Emmys for his work. Quested has served as a producer on over 35 films, including Sebastian Junger’s The Last Patrol, Korengal, and the PGA- and twice Emmy-nominated Which Way Is the Front Line From Here?; the Oscar-nominated Restrepo; and National Geographic Doc Films’ duPont Award-winning Hell on Earth: The Fall of Syria and the Rise of ISIS. Quested is also an award-winning music video director, working with such artists as Dr. Dre, Nas, Puffy, Sting, Master P, Cash Money, and Trick Daddy. His credits include “Stretch and Bobbito: Radio That Changed Lives,” “Rubble Kings,” “Pussy Riot: A Punk Prayer,” “Smash and Grab: The Story of the Pink Panthers,” “Stolen Seas,” “The List,” “Tell Spring Not to Come This Year,” and “Doin’ It in the Park: Pick-Up Basketball, NYC.”

“The film’s two brutal narratives – the caravans and the web of narco-trafficking – don’t always coalesce and may have benefited from a longer format.” – Kevin Crust, Los Angeles Times

“A very hard and complicated story to tell. But Junger and Quested are more than up to challenge in Blood on the Wall.” – David Zurawik, Baltimore Sun