Urgent and nuanced, Civil War (or, Who Do We Think We Are) travels 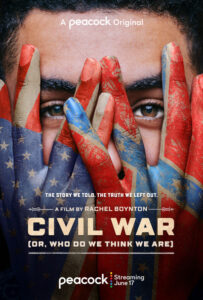 across the United States, exploring how Americans tell the story of their Civil War. Filmed from the last year of Obama’s presidency through the present, it interweaves insightful scenes and touching interviews filmed North and South, painting a uniquely crafted, multi-faceted portrait of the American psyche and the deep roots of its turbulent times. With subtlety and determination, Civil War portrays a nation in denial, haunted by an

embittered past and the stories it refuses to tell. Director Rachel Boynton (Our Brand is Crisis, Big Men) joins us for a conversation on the winding journey she

began in the hopes of understanding the long-held and deeply rooted “stories” we tell ourselves about the war that nearly destroyed any semblance of a United States and how we might be able to break through the mythology to reach a point where a more perfect union is possible.

Beginning October 24 Civil War will be streaming at Peacocktv.com

About the filmmaker – Rachel Boynton produced and directed the feature-length documentary Our Brand Is Crisis, filming for three years on two continents. Winner of the International Documentary Association’s Best Feature Documentary Award and nominated for an Independent Spirit Award, it was named the #3 movie of 2006 by New York Magazine, and appeared on several other “Best of 2006” lists, including those of the New York Times and the LA Weekly. The film aired internationally on the BBC, HBO Latin America, ARTE, VPRO, and the CBC among others and was televised in the United States on The Sundance Channel. Our Brand Is Crisis also screened at multiple festivals worldwide including SXSW, the 34th New Directors/ New Film Series presented by New York’s Museum of Modern Art and the Film Society of Lincoln Center, and the Full Frame Documentary Film Festival, where Rachel was the winner of the Charles E. Guggenheim Emerging Artist Award. Currently George Clooney’s company, Smokehouse, plans to remake Our Brand Is Crisis as a fiction feature. Rachel’s other credits include associate producer for the feature documentary Well-Founded Fear, producer/ director/ cinematographer for Pageant Perfect, and associate producer of People Like Us: Social Class in America. She has managed shoots across America, worked on films in Cuba and France, and directed casting for reality-based commercials.

“The film takes familiar topics and looks at them in a whole new way. It is interesting to see how different parts of the country look at the Civil War.” – Nathaniel Muir, AIPT

“Its thesis that the North won the Civil War and the South won the Reconstruction … will be revelatory to young students, and anyone whose past schooling glossed over or distorted the deeper meaning of those events.” – Matt Zoller Seitz, RogerEbert.com

“An alarming and vital stepping stone toward truth and, above all, democracy. The more we face the harsh truths about history or the present without any sugar coating, the closer we’ll be to democracy.” – Avi Offer, NYC Movie Guru

“Interviewing teachers, students, Confederate buffs and state politicians, Boynton delves into the abyss dividing Americans in terms of what we know about our own history and how what we know differs by region, self-selection and heritage.” – Ann Hornaday, Washington Post

“No, there’s not a happy ending to “Civil War.” But there’s also no shortage of provocative inquiry, or empathy, or understanding.” – John Anderson, Wall Street Journal