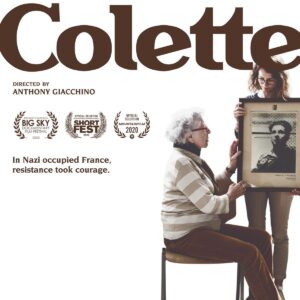 surviving members of the French Resistance, ninety-year-old Colette Marin-Catherine. As a young girl, she belonged to a family of Resistance fighters that included her 17-year-old brother Jean-Pierre. The last time Colette saw Jean-Pierre was in 1943, when he was arrested by the Gestapo and “disappeared” into the Nazi concentration camp system, never to be seen by his family again. The family was inwardly shattered, but outwardly stoic. No tears. Never permitted. For the past 74-years, Colette has never allowed herself to put one foot in Germany. But that’s all about to change when a young

history student named Lucie enters her life. Lucie is researching the camp in Germany where Jean-Pierre died. Tracing the story of Jean-Pierre is, in fact, her special assignment.  The film follows Colette as she travels with Lucie to what remains of the forced labor camp near Nordhausen, Germany. It’s a journey of discovery on many levels, but the film’s greatest

revelation is Colette herself, who at 90, is finally ready to let go of what she has, for over seven decades, held so tightly inside. Lucie’s youth and genuine concern has pierced the armor. The ultimate discovery of the film is Colette’s to make. That some wounds can only be healed if we allow them to be re-opened. Director Anthony Giacchino and Producer Alice Doyard join us to talk about the incredible strength of Colette Marin-Catherine and why her clear-eyed admonishment that we never forget the monstrous brutality of Nazi Germany as well as the importance of vigilance and resistance.

For news and updates go to: colettedoc.com

Director’s Statement – “When I first met Colette in the fall of 2019, one of the first things she told me was: ‘When it’s your turn to live through a war, you’ll see you don’t have time to feel anything.’ It was quite an introduction. While making the film, I learned that only one percent of the French population had actively resisted the Nazi occupation before the Normandy Invasion and Colette — as a young girl — was one of those resisters.  She had so much to tell us about the war. I was particularly interested in her immediate family, as they all played their part in the Resistance. In fact, Colette’s 17-year-old brother, Jean-Pierre, was captured by the Gestapo and died a gruesome death in a German forced labor camp. Seven full decades beyond the events of Colette’s youth, the war’s aftermath remains as a dramatic, living thing to filmically explore. And the terrific reality is that war, at its core, is a universally human experience that stays inside all who go through it. And as Colette’s story demonstrates, healing is possible if we find the courage to face our darkest and most haunting memories.” – Anthony Giacchino

“The bond between these two different, very strong, intelligent women renders this film staggeringly powerful whilst remaining simplicity itself. I’ve never seen anything quite like it.” – Emma Thompson