Filmed over the course of three years, THE PLACE THAT MAKES US, is an 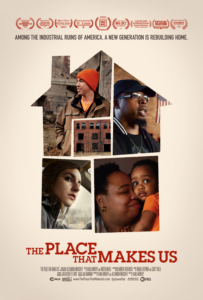 intimate and inspiring portrait of Youngstown Ohio, a quintessential post-industrial American city, seen through the efforts of a new generation of residents who have chosen not to abandon their hometown, as so many have, but to stay, rebuild and make a life for themselves. Unlike their parents, haunted and traumatized by watching their way of life crumble around them, these young leaders and community activists grew up in the

remains. Unbeholden to the memory of Youngstown’s heyday, they are able to envision a new future. Interweaving archival footage and home movies of a prosperous but forgone past, this film is a poetic testimony to the profound resilience and

dedication it takes to change a community. THE PLACE THAT MAKES US, directed by Emmy-nominated producer, Karla Murthy, will be premiering on America Reframed WORLD Channel and PBS apps on March 30th. Director Karla Murthy joins us to talk about how she crafted a hopeful meditation on the meaning of the American dream today among the industrial ruins of America, and how a new generation is rebuilding their home while reconnecting with their roots.

For news and updates go to: greenefortproductions.com

Host your own screening by contacting: screenings@collectiveeye.org

About the filmmaker – Karla Murthy, Director and Producer is an Emmy Award-nominated producer. She began her career working for the veteran journalist Bill Moyers.  For over 15 years, she has been a producer, cameraperson and correspondent for several news programs on PBS. Her work was described by the Columbia Journalism Review as “compelling, informative and compassionate.” Her directorial debut, the feature documentary The Place That Makes Us has won numerous film festival awards and will make its national broadcast premiere on America ReFramed in Spring 2021. Karla is of Filipino and South Asian descent. She grew up in Texas studying classical piano and graduated from Oberlin College with a degree in Religion and Computer Science. She is an alum of the Third World Newsreel Workshop, the Documentary Institute at Antioch College in Ohio, and is based in New York City. To find out more go to: karlamurthy.net