In Conversations with a Killer: The John Wayne Gacy Tapes award 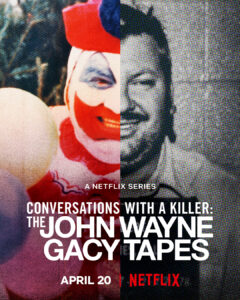 winning filmmaker Joe Berlinger pulls back the curtain on the notorious serial killer John Wayne Gacy, the one-time aspiring politician, beloved local contractor, and part-time clown-for-hire who murdered 33 young men between 1972 and 1976. The majority of his victims were found buried under his house, in the quiet northwest suburbs of Chicago.

Fifty years later, DNA scientists are still trying to identify all of his victims, but thanks to 60 hours of unearthed audio between Gacy and his defense team, we have fresh perspective on the narcissistic mindset of the murderer and a deeper

understanding of how he operated for so long with impunity. The second installment in an ongoing series from filmmaker Joe Berlinger (Conversations With a Killer: The Ted Bundy Tapes), this three-part documentary also features new interviews with key participants – some of whom have never talked

before, including gut-wrenching testimony from one of Gacy’s survivors – all in search of answers to a crucial question: How was a public figure like Gacy able to get away with murder for so long? Director Joe Berlinger (Brother’s Keeper, Crude, Metallica: Some Kind of Monster)  joins us to talk about what draws him to the backstories involving people like Bundy and Gacy, and the personal impact explorng them has on his own outlook on humanity.

For screenings and updates go to: netflix.com

About the filmmaker –  Joe Berlinger is one of the leading storytellers of his generation, drawing attention to social justice issues in the U.S. and abroad and creating landmark films such as: Brother’s Keeper, a DGA Award-winner that broke new ground with its narrative storytelling techniques; HBO’s  Paradise Lost trilogy with resulted in the freeing of the wrongly-convicted West Memphis Three after almost two decades in prison; and Some Kind of Monster, an intimate portrait of Metallica that redefined the rockumentary genre, one of seven Berlinger films to premiere at the Sundance Film Festival. Berlinger’s  passion for using media to bring attention to the issue of wrongful conviction served as the inspiration for Wrong Man for Starz, which took an in-depth look into six separate cases of alleged wrongful  conviction over two seasons. In 2019, Berlinger broke new ground for himself by covering the same subject in scripted and unscripted forms simultaneously with Conversations With a Killer: The Ted Bundy Tapes  and Extremely Wicked, Shocking Evil and Vile, which starred Zac Efron as Bundy. Both aired on Netflix and attracted enormous audiences around the world, with  Conversations becoming the network’s highest-rated nonfiction title last year, and Extremely Wicked landing in the top ten of most-streamed titles in any genre for 2019. Berlinger continued his work for Netflix with the docuseries  Jeffrey  Epstein: Filthy Rich, a victim-focused look at the sordid life of one of the world’s most vile serial pedophiles. Berlinger’s body of social justice films expanded with Starz’s Confronting a Serial Killer, following author Jillian Lauren as she aids law enforcement in solving cold case murders targeting marginalized communities, particularly women of color, through her unprecedented relationship with the most prolific serial killer in American history, Sam Little. For more go to: radicalmedia.com/directors/joe-berlinger

“What stands out in this project from director Joe Berlinger is the historical context of how Gacy exploited the vulnerability of young men and teens, especially those who had left home or been cast out by their families.” — Brian Lowry, CNN.com

“A chilling descent into the mind and life of one of Americas most prolific serial killers.” – Romey Norton, Ready Steady Cut

“As an example of the well-worn genre of true-crime docs, it’s decently well-structured, moves fast at a mere three hours(!), and accurately pins down the societal ills that Gacy’s predation highlighted.” – Clint Worthington, Consequence