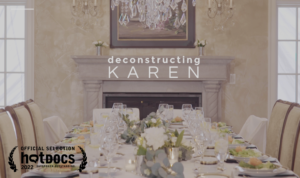 follows the work of Regina Jackson and Saira Rao as they continue to challenge the pall of racism through their RACE2DINNER — a movement to inspire white women to confront themselves and to acknowledge their own racism and complicity in white supremacy. The dinners will remind you of your favorite childhood memory of playing

the game Clue. The most dangerous person in the room is never the obvious suspect. What if the bible-thumping, conservative Trump voter isn’t any more racist than the liberal yoga teacher who screams “love is love” What if well-intentioned liberal white women actively play

a role in upholding racism and white supremacy? In this provocative documentary, white women experience RADICAL HONESTY ABOUT RACISM…their daily role in upholding it, their conditioning to ignore it and the essential part they can play in tearing down the systems that are killing black and brown people every single day. Director, producer and writer Patty Ivins Specht joins us for a conversation on the why confronting white women is vital to breaking the stranglehold that latent and overt racism has on America, connecting with the organizers of RACE2DINNER, Regina Jackson and Saira Rao and her reaction to the spirited conversations showcased in her insightful new film, Deconstructing Karen.

For more go to: deconstructingkaren.com

About the filmmaker – Director | Producer| Writer Patty Ivins Specht is an Emmy-award winning producer, director and writer.  Documentaries about womanhood (Logo’s HUNGRY, Discovery’s Mean Girls Mind Games, PBS’s Girls on the Wall), equality (Logo’s Light in the Water) plus documentaries like AMC’s Marilyn Monroe:  THE FINAL DAYS which also included an extensive re-mastering of director George Cukor’s Marilyn Monroe vehicle SOMETHING’S GOTTA GIVE and and Showtime’s Reversal of Fortune. Patty believes in anti-racism work and continues to deconstruct her own inner Karen and to walk in Regina Jackson’s wisdom to have the courage to “call a thing a thing.”

About the subject – Saira (NOT Sara) Rao grew up in Richmond, Virginia, the daughter of Indian immigrants. After graduating from the University of Virginia and New York University School of Law, she served as a law clerk on the US Court of Appeals for the Third Circuit and an associate at the law firm of Cleary Gottlieb Steen & Hamilton. Saira is a published author, a successful entrepreneur, and a former congressional candidate.

About the subject – Born in Chicago in 1950, Regina Jackson remembers an America where everything was Black & white. Burned into her memory are the beatings & horrific treatment of civil rights workers, the Goodman, Chaney & Schwerner murders, the murder of Viola Liuzzo, the murder of MLK, JFK and his brother Robert. The violence perpetrated on innocent people going about their lives, by white people. It is these memories that drive Regina to push for real change in America. Which is why she co-founded Race 2 Dinner. Regina attended U of Colorado and the Executive MBA program at the University of Denver and, worked as a management consultant at Organizational Politics. Regina also spent 27 years in corporate America retiring in 1998 as a Sales Executive and has since started three successful businesses.

“Deconstructing Karen is an essential resource regarding the deep-seated racial divide here in the United States.” – Alan Ng, Film Threat