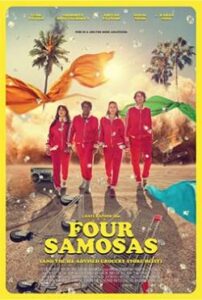 as he discovers that his fatalistic ex-girlfriend

RINA (Summer Bishil) is now engaged to a goat-shit recycler named SANJAY (Karan Soni), Vinny decides to disrupt her future wedding by stealing her dowry diamonds from her father’s grocery store. Crewing up with an actor who longs to go to Bollywood, a resourceful do-gooding newspaper editor and a malcontent immigrant engineer, Vinny and his

gang somehow pull off the heist despite their obvious ineptitude. But will the theft get Vinny and Rina back together again or lead to more misery? And will Vinny ever finish a song? Set entirely in LA’s “Little India” in a world of sari places, curry restaurants, Indian amateur-dramatic groups and

South-Asian revolutionaries, FOUR SAMOSAS is a love letter to all the “Little India’s” around the world, and a celebration of re-discovering your voice and finding your crew. Director / writer Ravi Kapoor (MISS INDIA AMERICA) joins us for a lively conversation on the inspiration for his scattershot comedy about acculturation, youthful exuberance, family, Artesia, love and assembling a fantastic cast of talented actors, led by a breakout performance from Venk Potula.

For screenings and updates go to: foursamosas.movie

For more go to: ifcfilms.com/films/four-samosas

About the filmmaker – Director/Writer Ravi Kapoor (Miss India America) is a writer, director and actor who was born and raised in Liverpool. He trained at the East 15 School of Acting in London and has worked extensively in both the UK and America. He directed and co-wrote the feature MISS INDIA AMERICA which played at many festivals and then sold to Netflix worldwide and is now available on most streaming channels. His second feature FOUR SAMOSAS, a quirky heist comedy set in LA’s “Little India” will be hitting the festival circuit in June. His short films played and won awards at various festivals in the US. He’s appeared in numerous TV shows and movies including FLIGHT, BOOKCLUB, THE STARLING, 24, SHARP OBJECTS, NCIS, ELEMENTARY, THE BRINK, and many more. He was also a series regular on the shows GIDEON’S CROSSING and CROSSING JORDAN for which he also directed.

“Colorful and handsomely composed like a Wes Anderson movie, but far from that director’s world of gloomy, globe-trotting dandies, “Four Samosas” is a jovial romp through the Indian enclave of Artesia located outside of Los Angeles.” – Beatrice Loayza, New York Times

“Brimming with wide-eyed invention and featuring an ensemble cast on solid form, ‘Four Samosas’ is a concise piece of cultural comedy, with some B-movie heist elements thrown in for good measure.” – Martin Carr, We Got This Covered

“Its plot may run out of gas, but “Four Samosas” never stops being likable.” – Noel Murray, Los Angeles Times

“Kapoor does a great job of giving audiences an authentic experience in an outrageous story. The fast paced storytelling is top notch and the characters are a fun group to watch.” – Nathaniel Muir, AIPT