FERROEQUINOLOGY follows the travels of two artists enthralled by the uncanny 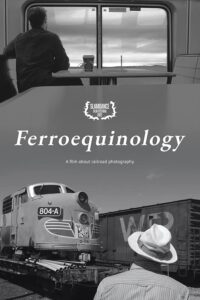 lure of locomotion set out on journeys across America. Andrew Cross chases freight trains through the Black Rock desert in Nevada in pursuit of a perfect landscape shot. McNair Evans travels on an Amtrak train from San Francisco to Portland, sharing stories and making portraits with fellow passengers. Desolate carriages take on an otherworldly presence and time loses its grasp in this study of photographers in motion, capturing slow travel in today’s increasingly fast-paced society. Railroad documentaries hold a significant place in film history. From Auguste and Louis Lumière’s early experiments in The Arrival of a Train at La Ciotat Station to the iconic John Grierson narrated Night Mail or D. A. Pennebaker’s Daybreak Express – the movement, machinery, infrastructure and culture surrounding railroads has fascinated filmmakers since the birth of cinema. FERROEQUINOLOGY draws 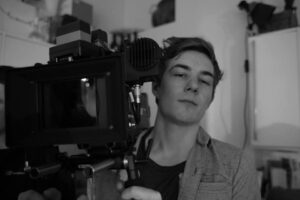 on this established tradition and brings this potent documentary theme into focus for the contemporary era. Gravitating toward collaborators with particularly artistic sensibilities, Nevill set about filming in ways that engaged directly with their creative work. Shooting in black and white helped to distance the film’s cinematography from each character’s photographic project and reflected the romanticized gaze many of these enthusiasts brought to their images as well as their often sentimental relationship with railroads. Director Alex Nevill joins us for a conversation on his own fascination with trains drew him into a further exploration of this world, meeting McNair and Andrew and the films selection for the 2022 Slamdance film festival.

For news and updates go to: ferroequinology.net

FERROEQUINOLOGY, literally meaning the study of iron horses, is a feature-

length documentary with luminous black and white cinematography, directed by Alex Nevill about the passion and artistry of railroad photography. Having made its World Premiere at Chichester Film Festival (UK) in August 2021, Ferroequinology comes Stateside for its North American Premiere at Slamdance Film Festival. The film will screen via Slamdance’s virtual portal from Jan. 27-Feb. 6, 2022. More information at slamdance.com/festival.

Director Alex Nevill joins us for a conversation on his own fascination with trains drew him into a further exploration of this world, meeting McNair and Andrew and the films selection for the 2022 Slamdance film festival on Friday, Jan. 28th at 4pm PT/7pm ET and available on the festival platform through Feb. 6th.

About the Filmmaker: Alex Nevill (Director/Cinematographer) is a filmmaker and cinematographer based in London, UK. He has photographed several independent feature films as well as short projects with Creative England, Channel 4 and Film London. Nevill directed Fishcakes & Cocaine, a short documentary supported by the British Film Institute, which premiered at Berwick Film & Media Arts Festival before screening at the London and Glasgow short film festivals. He holds an MFA in film practice from the Screen Academy Scotland and completed his PhD at the University of the West of England. Alongside his film work, he teaches at Kingston School of Art where he is Course Leader for the BA Filmmaking degree.