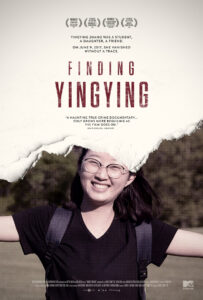 student, Yingying Zhang, who comes to the U.S. to study. In her detailed and beautiful diaries, the aspiring young scientist and teacher is full of optimism, hoping to also be married and a mother someday. Within weeks of her arrival, Yingying disappears from the campus. Through exclusive access to Yingying’s family and boyfriend, Finding Yingying closely follows their journey as they search to unravel the 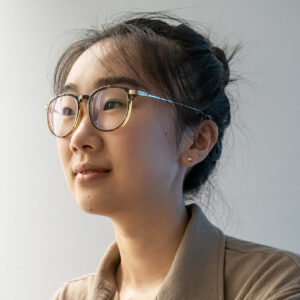 mystery of her disappearance and seek justice for their daughter while navigating a strange, foreign country. But most of all, Finding Yingying is the story of who Yingying was: a talented young woman loved by her family and friends. Director Jiayan “Jenny” Shi joins us for a conversation on documenting a heartbreaking story, gaining the trust and confidence of a grieving family dealing with some very difficult truths.

For news, screenings and updates go to: findingyingying.com

To watch the film go yo: findingyingying.com/see-the-film

About the filmmaker – Jiayan “Jenny” Shi is a Chicago-based documentary filmmaker and video journalist who is passionate about social justice issues regarding people of color. She shoots, edits and produces video stories and short documentaries about immigration, race and crime in Chicago for multiple outlets. She is also working on several projects as a researcher, digital content editor and translator including the ITVS co-produced web series Pulling The Thread and the 2020 Academy Award-winning Higher Ground Netflix film, American Factory. Jenny is a graduate of Kartemquin’s Diverse Voices In Docs program, a TFI Network alum, the winner of the Paley DocPitch Competition 2018 and a fellow of 2020-2021 Women at Sundance | Adobe Fellowship. Jenny is named one of the DOC NYC “40 Under 40” filmmakers.

About Kartemquin – Sparking democracy through documentary since 1966, Kartemquin is a collaborative community that empowers documentary makers who create stories that foster a more engaged and just society. Kartemquin’s films have received four Academy Award® nominations and won many more major prizes, including six Emmys® and four Peabody Awards. Recognized as a leading advocate for independent public media, Kartemquin has helped hundreds of artists via its filmmaker development programs and championing of documentary.Kartemquin is a 501(c)3 not-for-profit organization based in Chicago.

“It’s remarkable how Finding Yingying gets away from the traditional framework that governs how these stories are told, allowing the Zhangs to be seen separately from the horrific situation they find themselves in…” – Stephen Saito, Moveable Fest

“’Finding Yingying proves that centering the lives lost and the loved ones left behind can make for an intriguing a true-crime documentary.” – Jonita Davis, The Black Cape

“Compelling, heartfelt, and just as frustrating to watch – Finding Yingying not only makes for one of the most essential watches of the year but also for the sake of much-needed change.” – Andrew J. Salazar, Geeks of Color