Heaven’s Gate: The Cult of Cults is a thorough examination of the infamous UFO 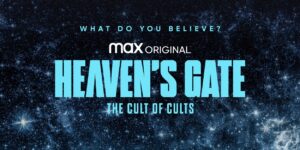 cult through the eyes of its former members and loved ones. What started in 1975 with the disappearance of 20 people from a small town in Oregon, ended in 1997 with the largest suicide on US soil and changed the face of

cult that shocked the nation with their out-of-this-world beliefs. Director and Producer Clay Tweel joins us for a rollicking conversation on one of the most sensational and compelling collection of intelligent, engaging, and spiritually inspired people to ever embrace a collection of beliefs, brought to them by former minister and natal nurse, that eventually led them to hitch a ride on an undetectable space ship heading for parts unknown.

Heaven’s Gate: Cult of Cults can be seen on: hbomax.com

In the beginning… The son of a Presbyterian minister and a former soldier, Marshall Applewhite began his foray into biblical prophecy in the early 1970s. After being fired from the University of St. Thomas in Houston, Texas over an alleged relationship with one of his male students, he met Bonnie Nettles, a 44-year-old married nurse with an interest in theosophy and biblical prophecy, in March 1972. According to Applewhite’s writings, the two met in a hospital where she worked while he was visiting a sick friend there. It has been rumored that it was a psychiatric hospital, but Nettles was substituting for another nurse working with premature babies in the nursery.  Applewhite later recalled that he felt as though he had known Nettles for a long time and concluded that they had met in a past life. She told him their meeting had been foretold to her by extraterrestrials, persuading him that he had a divine assignment. – (from Wikipedia)

About the filmmaker – Clay Tweel is a native Virginian living in Los Angeles, California. Clay is a documentary director/producer/editor with a passion for telling great character based stories. His works include Make Believe, Print the Legend, Finders Keepers, Out of Omaha and Gleason – the last of which was shortlisted for an Academy Award and named one of the 5 best documentaries of 2016 by the National Board of Review. His features have been distributed by Showtime, Netflix, and Amazon Studios while working closely with companies that include Open Road, The Orchard and Exhibit A. Most recently, Clay executive produced and directed all six episodes of The Innocent Man, a true crime doc series for Netflix based on John Grisham’s only non fiction book. He is currently directing a feature documentary and producing numerous projects under his banner Parkside Films. claytweel.com

About the filmmaker – Shannon Riggs is a producer with a diverse background in film spanning multiple genres and scales. Alongside award winning director Clay Tweel, she produced the Netflix 6 part docu-series, The Innocent Man, and the Academy Award shortlisted documentary Gleason. Recently Shannon produced The Smartest Kids In the World based on Amanda Ripley’s New York Times bestseller, which premiered at DOC NYC in 2018 and was directed by Sundance Grand Jury Prize winner, Tracy Droz Tragos. Shannon was a Sundance Fellow and participant in their 2015  Female Filmmaker Initiative.  She is also honored to be a member of Women in Film and actively mentors young filmmakers through various industry programs.   She is currently producing a feature documentary and numerous projects under her banner Parkside Films with co-founder and director Clay Tweel.

“Heaven’s Gate: Cult of Cults is a thoughtful assessment of the mechanisms of how otherwise smart, savvy people are attracted to fringe beliefs. It takes a story that is larger than life and brings it solidly back to earth.” – Ashlie D. Stevens, Salon.com

“What The Cult Of Cults does very effectively is tell the story of the organization, showing why it attracted members and held onto them for so long.” – Joel Keller, Decider

“Viewers may bob in and out during the first few episodes, though it’s worth sticking out for the grand finale, as sickening as it is oddly poignant.” – Ryan Lattanzio, indieWire

“The human toll isn’t lost among the kooky, UFO-centric beliefs of Ti and Do’s followers.” – Beau North, The Spool