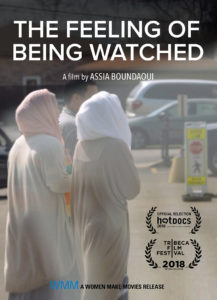 where director she grew up. It is a community where most of her neighbors think they have been under surveillance for over a decade. While investigating their experiences, Assia uncovers tens of thousands of pages of FBI documents that prove her hometown was the subject of one of the largest counter-terrorism investigations ever conducted in the U.S. before 9/11, code-named “Operation Vulgar Betrayal.” With unprecedented access, THE FEELING OF BEING WATCHED weaves the personal and the political as it follows the filmmaker’s examination of why her community fell under blanket government surveillance. Assia

struggles to disrupt the government secrecy shrouding what happened and takes the FBI to federal court to compel them to make the records they collected about her community public. In the process, she confronts long-hidden truths about the FBI’s relationship to her community. THE FEELING OF BEING WATCHED follows Assia as she pieces together this secret FBI operation, while grappling with the effects of a lifetime of surveillance on herself and her family. Director / Producer Assia Boundaoui talks about her own determination to hold the FBI and the government accountable, the impact the FBI surveillance has had on her family and community and the bigger question, why?

For news and updates go to: feelingofbeingwatched.com

For upcoming screenings go to: feelingofbeingwatched.com/screenings

“Expanding its scope beyond Bridgeview and Islamophobia, it looks at the larger question of how the United States government has targeted minority groups throughout its history.” – Kimber Myers, Los Angeles Times

“Equal parts angry and anxious, Boundaoui’s smart, unsettling documentary functions both as a real-world conspiracy thriller and a personal reflection on the psychological strain of being made to feel an outsider in one’s own home.” – Guy Lodge, Variety

“A quietly unsettling first-person doc,The Feeling of Being Watched proceeds as a head-on exploration of the gray area between fear and certainty.” – Sheri Linden, Hollywood Reporter

“This should be required viewing for all Americans, but especially those who think they couldn’t possibly be living in a surveillance state.” – Leah Pickett, Chicago Reader