HELP is the riveting story of a struggling young woman, Sarah, played by Jodie 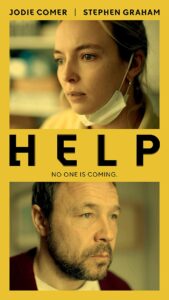 Comer (Killing Eve),  who is smart, but has never fit in, not in education and not in work. Her family told her she’d never amount to anything but she unexpectedly finds her calling as a carer at Bright Sky Homes. Sarah has a special talent for connecting with the residents, including one in particular, 47-year-old Tony, played by Stephen Graham (Boiling Point). Tony’s Young Onset Alzheimer’s has left him living out his days in care as his mind slowly deteriorates. His illness causes periods of confusion and violent outbursts, which the other  members of staff can’t handle, but with Sarah he begins to build a real bond. Sarah’s success at managing Tony and the other patients helps build her

confidence and restore her self-belief. Then March 2020 hits and everything Sarah has achieved is thrown into doubt with the arrival of the Coronavirus pandemic. She and her colleagues tirelessly fight tooth and nail, ill-equipped, poorly prepared, and seemingly left

helpless by the powers that be. A determined Sarah goes to extraordinary lengths to protect those in her care, whose conditions make their suffering and isolation all the more traumatic. But the staff’s unwavering commitment, compassion and heroic efforts can only do so much, and Sarah is pushed into a dark corner and desperately looks for a way out. Director Marc Munden stops by to talk about working with the HELP writer Jack Thorne on this and other projects, enlisting a superb cast of gifted actors, led by Jodie Comer, Stephen Graham, Ian Hart and Cathy Tyson, to tell a timely and timeless story of compassion and finding the courage to face down the deadly chaos of an unfathomable pandemic and institutional neglect.

For news and updates go to: mubi.com/films/help-2021-marc-munden

To watch HELP go to: acorn.tv

“It is rare that a TV drama manages to be agonising and compelling; unbearable yet utterly immersive. Help was such a drama.” – Carol Midgley, Times (UK)

“Comer and Graham remain faultless to the end, and the first hour is a fine addition to the wealth of pandemic testimonies that can and must be entered into the record in any way they can be.” – Lucy Mangan, Guardian

“The centrepiece was a virtuoso piece of directing from Marc Munden that followed Sarah over one hellish night shift. It is shot in the style of a horror film, as one continuous take. – Anita Singh, Daily Telegraph (UK)