In 2010 filmmaker Noah Hutton set out to document the work of visionary, and 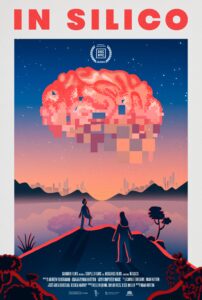 TED Talk supernova, neuroscientist Henry Markram, as he turns his frustration with his chosen field’s vested interest in maintaining a status quo attitude. With time elapsing and millions of dollars on the line, this compelling and fascinating documentary, IN SILICO, explores an audacious 10-year quest to simulate the  entire human brain

on supercomputers. Along the way, IN SILICO reveals the profound beauty of tiny mistakes and bold predictions — a controversial space where scientific process meets ego, and where the lines between objectivity and ambition blur. Director, producer, writer, cinematographer, editor and composer Noah Hutton (Lapsis, Crude Independence, Deep Time) joins us for an entertaining conversation on the

visionary / foolhardy project to map and replicate the most complex organism / data processor in the known universe as well as Hutton’s own personal and professional determination to chronicle the jagged trajectory of this groundbreaking enterprise.

For updates and screenings go to: insilicofilm.com

For more on the work of Noah Hutton go to: couple3films.com

About the filmmaker –  Director, Cinematographer, Editor, Composer Noah Hutton directed, edited, and scored the award-winning a number of documentary features, including Deep Time (SXSW 2015) and Crude Independence (SXSW 2009). In 2015, Noah was named a Salzburg Global Fellow in Neuroscience & Art, and created Brain City, a multi-platform installation in Times Square commissioned by the Times Square Arts Alliance that brought visuals from six leading neuroscience labs to some of the largest outdoor displays in the world. In 2020, he wrote and directed the sci-fi feature Lapsis, which premiered in the narrative feature competition at SXSW 2020 and was acquired by Film Movement for U.S. theatrical release in early 2021. He graduated from Wesleyan University, where he studied art history and neuroscience, and received the Jacob Burns Film Center’s 2015 New Lens Award. For more go to: couple3films.com

“In attempting to synthesize so much material into In Silico, he creates something that feels more like a series of encyclopedia entries than a story.” – Richard Whittaker, Austin Chronicle

“In the end, this isn’t about science. It’s about the universals of power, greed, ego, and fame. Enjoy.” – Neely Swanson, Easy Reader

“A fascinating window into the trouble grandiose research projects and grandiose personalities can generate.”- Nature Magazine

“The project’s spectacular size and public profile serve as a magnifying lens held to the system at large, allowing us to examine the rot of corporate bureaucracy taking hold of scientific research institutes everywhere.” – Science for the People Magazine

“In Silico shows the scientific process in all its messy glory, with its revelations, missteps, labor, frustrations, self-promotion, fights for funding, and fractious egos. And it shares a filmmaker’s progress from an awestruck acolyte to a wiser and more objective observer.” – Boston Globe