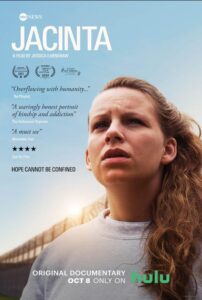 where Jacinta, 26, and her mother Rosemary, 46, are incarcerated together, both recovering from drug addiction. As a child, Jacinta became entangled in her mother’s world of drugs and crime and has followed her in and out of the system since she was a teenager. This time, as Jacinta is released from prison, she hopes to maintain her sobriety and reconnect with her 10-year-old daughter, Caylynn, who lives with her paternal grandparents. Despite her desire to rebuild her life for her daughter, Jacinta continually struggles 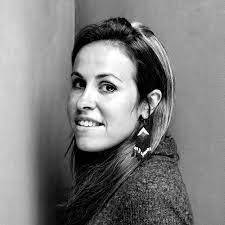 against the forces that first led to her addiction. JACINTA earned its director, Jessica Earnshaw, the award for Best New Documentary Director at the 2020 Tribeca Film

Festival. It has continued an impressive festival run at DOCNYC, AFI Fest, IDFA, and the Hot Springs Documentary Film Festival where it won the Best Documentary award. With unparalleled access and a gripping vérité approach, director Jessica Earnshaw joins us to talk about her deeply intimate portrait of mothers and daughters and the effects of trauma over generations.

For news, updates and screenings go to: jacintafilm.com

The Hulu Original Documentary will premiere on Hulu on October 8

About the filmmaker – Jessica Earnshaw is a documentary filmmaker and photographer currently based in Los Angeles. Her work focuses on criminal justice, familial relationships and women. Her photography has appeared in National Geographic, The Marshall Project, Mother Jones Magazine, The New York Times, The Wall Street Journal, NPR, amongst others. Jessica is a graduate of the International Center of Photography’s photojournalism program (New York). She later worked as a junior photo editor at TIME Magazine. In 2015, she received the prestigious Rita and Alex Hillman Foundation Fellowship & Grant to photograph aging in American prisons. In 2016, her aging in prison work was published in National Geographic, Huffington Post and PDN Magazine and named one of the most interesting photo essays of the week by Buzzfeed. Jessica has worked on stories in the criminal justice space for several years that cover issues surrounding re-entry after life sentences, gender-responsive corrections, and trauma. Jessica’s first feature film, JACINTA, won the Albert Maysles Best New Documentary Director Award at the Tribeca Film Festival 2020. Executive produced by Impact Partners, JACINTA was selected for the Cinema Eye Stay Focused 2021 initiative and nominated for a Cinema Eye Honors Spotlight Award. Jessica was recently selected for Doc NYC’s 40 under 40 list.  jessicaearnshaw.com

“A searingly honest portrait of kinship and addiction… A hard-hitting and heartbreaking documentary… In a playing field usually occupied by men, the fact that‘Jacinta’ focuses on three generations of women whose lives have beenupended by drugs and crime makes it a rare study.” – Jordan Mintzer, The Hollywood Reporter

“[A] gripping, characterful doc debut… remarkably engrossing… As a

snapshot of relapse, recidivism and remorse in a dead-end mill town in

“A profound meditation on the troubling intersection between addiction and incarceration… Overflowing with humanity… Earnshaw has made a deeply emotional and poignant film on the personal, familial horrors of addiction.” – Christian Gallichio, The Playlist