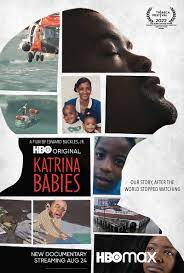 brings focus and context the sixteen years since Hurricane Katrina devastated New Orleans, and an entire generation still grappling with the lifelong impact of having their childhood redefined by tragedy. New Orleans-based filmmaker Edward Buckles Jr., was 13 years old during Katrina and its initial aftermath, spent seven years documenting the stories of his peers who survived the storm as children. In his award winning film, KATRINA BABIES, Buckles draws upon his community’s tradition of oral storytelling to open a door for healing and to

capture the strength and spirit of his city.  He found common cause-and shared trauma–with young people whose lives were similarly shaped by the storm. KATRINA BABIES interview subjects were

between 3 and 19 years old when the storm hit: Some stayed in New Orleans, Others fled the city and the neighborhoods that held so much history for them. Director Buckles joins for a conversation on his award winning film and how he was able to capture both the unique, joyful flavor of Black culture in the Crescent City as well as the nightmarish conditions that swallowed up so many in the aftermath of Katrina.

“A moving, intimate, and humane work that deserves to be put on the same shelf as Spike Lee’s “When the Levees Broke.” – RogerEbert.com

“Katrina Babies tells the story of a forgotten, displaced, furious—and yes, resilient— generation in their own words.” – Karen McMullen

“Katrina Babies’ seems to say New Orleans wasn’t rebuilt, but, rather, built over. The formerly Black neighborhoods have been broken up and gentrified. And, sometimes, the old residents are too afraid of the new New Orleans to ever come home.” – Wayne Broadway, Black Girl Nerds

“A powerful documentary that focuses on not only the tragedy of Hurricane Katrina, but also on the resilience of the people of New Orleans.” – Radhika Menon, Decider