KURT VONNEGUT: UNSTUCK IN TIME is a dazzling, worthy tribute to Kurt 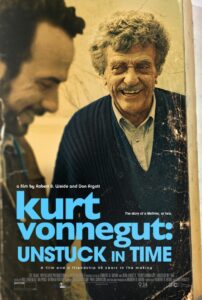 Vonnegut and the first of its kind on Vonnegut – is a deep, immersive dive into the author’s upbringing and his creative output. It spans his childhood in Indianapolis, his experience as a Prisoner of War in World War II, his marriage, family, and divorce, his early careers as a publicist for General Electric and a car salesman, and his long years as a struggling writer, leading to eventual superstardom in 1969 following the publication of his lightning-bolt anti-war novel Slaughterhouse-Five. KURT VONNEGUT: UNSTUCK IN TIME began 39 years ago when young, struggling filmmaker

Robert Weide (Curb Your Enthusiasm, Lenny Bruce: Swear to Tell the Truth) wrote a letter to his literary idol proposing a documentary on Vonnegut’s life and work. Shooting began in 1988 and the resulting film reflects

the friendship and bond Weide and Vonnegut formed over the decades. KURT VONNEGUT: UNSTUCK IN TIME is first and foremost a biography of a beloved American author. But it also documents a filmmaker’s odyssey as he examines the impact of a writer’s legacy on his own life, extending far beyond the printed page. Director Robert Weide joins us for a conversation on Vonnegut’s literary legacy, his family’s fascinating history and the mutual respect and kindness of friendship.

For news and updates go to: ifcfilms.com/films/kurt-vonnegut

About the filmmaker – At the age of 22, Director, producer and writer Robert Weide produced The Marx Brothers in a Nutshell, a documentary tribute to his first love(s) which became one of the highest-rated programs in PBS history. Two years later, he produced and directed The Great Standups: Sixty Years of Laughter for HBO. In 1986 he received the national prime-time Emmy Award for W. C. Fields Straight Up, honored as the year’s Outstanding Informational Special. In 1989, Weide produced, wrote and directed Mort Sahl: The Loyal Opposition, which aired on PBS’ ”American Masters” series. From 1990-’94 he served as Vice President of Development for Rollins & Joffe Productions (producers of Woody Allen’s films) where he executive-produced Larry Gelbart’s critically acclaimed political  satire, Mastergate  for the Showtime Network and Rick Reynolds’ one-man confessional,  Only The Truth Is Funny. He has also produced the HBO specials But Seriously, Folks and The Lost Minutes of Billy Crystal. 1996 saw the release of Weide’s first feature film as writer producer,  Mother Night, based on the novel by Kurt Vonnegut. The film starred Nick Nolte, John Goodman, Alan Arkin, Sheryl Lee, and Kirsten Dunst. In 1998, Weide completed a twelve year labor-of-love, his acclaimed documentary Lenny Bruce: Swear to Tell the Truth. His efforts were rewarded with an Academy Award nomination for Best Feature Documentary, followed in ’99 with an Emmy award for the film’s editing and an Emmy nomination for Outstanding Non-Fiction Special. In 1999, HBO premiered Weide’s comedy special, Larry David: Curb Your Enthusiasm, a partly real, partly embellished ”mock-umentary” chronicling the return to stand-up by Larry David, co-creator of Seinfeld. For five seasons, Weide served as the Principal Director and Executive Producer of the series based on this special, directing more than half the episodes. The series, Curb Your Enthusiasm, premiered on HBO in the Fall of 2000 to rave reviews and has so far had nine seasons on the cable network. It’s currently enjoying syndication and DVD sales all over the world. Weide won the Emmy Award for Comedy Direction for his Curb episode ”Krazee-Eyez Killa.” The show itself and Weide’s direction would be Emmy nominated for four years running. After a two year hiatus from the series, Weide returned to direct Season Eight’s ultimate “water cooler” episode, “Palestinian Chicken” which brought him the prestigious DGA Award  (Directors Guild of America) for Comedy Direction, and another Emmy Award nomination for the same. To-date, Weide has directed 28 episodes of the series.