MISSING IN BROOKS COUNTY follows two families as they arrive in Brooks County, 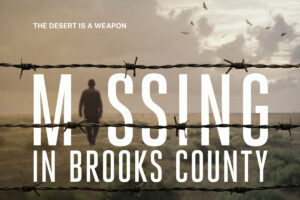 Texas to look for their loved ones who went missing after crossing into the country from Mexico. On their search they meet vigilante ranchers, human smugglers, humanitarian activists, and Border Patrol agents, all of whom are locked in a proxy version of the national immigration debate.  In order to build a portrait of everyday life in Falfurrias, Texas. In making MISSING IN BROOKS COUNTY the filmmakers, co-directors Lisa Molomot and Jeff Bemis 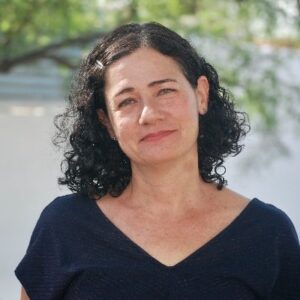 immersed themselves into the heart of the story. They were present at many moments of discovery and revelation, documenting the missing as they were reported, rescued, recovered or exhumed. They rode with Sheriff’s deputies and Border Patrol, with

ranchers and vigilantes, filmed men and women wading across the Rio Grande at night, and  filmed men and women as they surrendered to Brooks County law enforcement, dehydrated and exhausted. They documented the emotional testimony of a border crosser, his face shielded, as he described the moment he realized the teenage boy he was carrying—one of the missing individuals portrayed in the film—was no longer alive. Co-directors Lisa Molomot and Jeff Bemis join us to talk about a sobering truth: the deadliest part of the journey was far from the border and their gripping portrait of a place that confronts the life-and-death consequences of a broken immigration system.

For news, screenings and updates go to: missinginbrookscounty.com

Filmmakers’ Statement: MISSING IN BROOKS COUNTY began as the story of one forensic scientist trying to identify migrants buried anonymously in Brooks County, Texas. But each time we returned to film in South Texas the story got bigger, as we realized the complexity and severity of the situation. We met migrants, sheriffs and activists. Ranchers, rangers and vigilantes. Consuls, judges, and undertakers. If we held stereotypical beliefs about Border Patrol agents, law enforcement and Texas ranchers, they have been obliterated by our experiences making this film. Our goal became to convey the complexity of the situation we encountered. Border Patrol is given the job of operating a massive immigration checkpoint situated in the middle of a treacherous desert, and also of saving the lives of migrants who attempt to circumvent it. Local ranchers are divided over what to do about the situation. Migrants themselves often have no idea of the true dangers of the journey they have chosen to undertake, and are at the mercy of coyotes (human smugglers) who will leave them to die if they cannot keep up over the three-to-four day trek. In order to build a portrait of everyday life in Falfurrias, TX, vérité footage is the foundation of MISSING IN BROOKS COUNTY. We have been present at many moments of discovery and revelation, documenting the missing as they were reported, rescued, recovered or exhumed. We rode with Sheriff’s deputies and Border Patrol, with ranchers and vigilantes. We filmed men and women wading across the Rio Grande at night, and we filmed men and women as they surrendered to Brooks County law enforcement, dehydrated and exhausted. We filmed the emotional testimony of a border crosser, his face shielded, as he described the moment he realized the teenage boy he was carrying—one of the missing individuals portrayed in the film—was no longer alive. Most importantly, we met the families of the missing, who became the emotional center of the film. As rendered through the stories of Homero Roman and Juan Maceda, our vision for MISSING IN BROOKS COUNTY is an immersive experience of an American town that has been caught in the middle of the life and death situation created by the militarization of the U.S./Mexico border. And just as we have learned so much while making this film, we hope viewers will look at immigration in a new way and begin to include the deceased and the missing in the national debate. – Lisa Molomot and Jeff Bemiss

About the filmmaker – Lisa Molomot, Producer/Co-Director/Cinematographer, has directed and edited documentaries about the American Southwest in recent years including THE CLEANERS, and SOLEDAD. She has also focused on stories about education. Her award-winning film SCHOOL’S OUT has been an integral part of the movement for providing outdoor education for young children, and her recent short film TEACHING IN ARIZONA is an inside look at the teaching crisis in that state. A recent Fulbright Scholar, she teaches a course at the James E. Rogers School of Law at the University of Arizona where she has worked with the Immigration Law Clinic for the past four years, has taught in the UA Human Rights Practice Graduate Program and is part of a network of human rights faculty.

About the filmmaker – Jeff Bemiss, Producer / Co-Director / Cinematographer, is an award-winning writer/director who has worked in shorts, features and documentaries, Jeff’s work has aired on network television and PBS. He is a graduate of the University of Southerrn California film school and the L.A. Sanford Meisner Academy. Originally trained in scripted filmmaking, Jeff’s film THE BOOK AND THE ROSE was a semi-finalist for the Academy Award for best short film. Jeff shot and directed the award-winning short documentary COACHING COLBURN about a young man with Fragile-X Syndrome, which premiered at the prestigious Big Sky Documentary Film Festival. Jeff is a Connecticut Artist Fellow and a Film Independent Fast Track Fellow. He freelances for disability and social activist clients and teaches film at Trinity College in Hartford, CT.

“One of the most nuanced and disturbing…films about the immigration crisis.” – Boston Globe