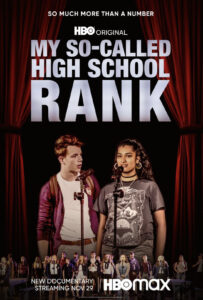 while staging a musical, until seismic events  upend their dreams and expectations. Months before the college admissions scandal made headlines in 2019, students in Sacramento, CA were busy creating a new musical that drew from their own experiences as talented but very anxious students – all focused on getting into the same top schools. RANKED, the musical, premiered just weeks before Federal charges were

levied against Rick Singer, the mastermind behind the college bribing scandal the FBI dubbed Varsity Blues. As word about the musical spread, schools around the country reached out to stage it with their students.The film features the “Ranked”

More on the films of Ricki & Annie: breakthrufilms.org

About the filmmakers – Break Thru Films is an award winning film and television production company based in New York City. Directors and writers Ricki Stern and Annie Sundberg are the leading creative forces and are known for crafting deft and cinematic journeys through unexpected territory. In 2019 they completed a 5-part documentary series for AMC that explores the 1986 murder of Jennifer Levin in New York City and the trial that ensued for “Preppy Killer” Robert Chambers.  “Preppy Murder: Death in Central Park” is an intimate look into the life of Jennifer Levin and the media frenzy that consumed the city.Other notable films include: “Joan Rivers – A Piece of Work” which premiered at the 2010 Sundance Film Festival where it won the US Documentary Prize for Best Editing; the 2008 Emmy nominated documentary feature “The Devil Came On Horseback;” and the 2007 Emmy nominated feature “The Trials of Darryl Hunt.”“Reversing Roe,” was a Netflix original documentary produced alongside ABC’s Lincoln Square Productions, premiered at the 2018 Telluride Film Festival and is nominated for two Emmys.  The film offers an illuminating look of the state of abortion and reproductive rights in America through candid interviews with key figures from both sides of the divide. Other films include the Peabody nominated “Marathon: The Patriots Day Bombing,” produced in partnership with the Boston Globe and HBO.  The film explores the week of April 15, 2013 and the long term impact of terrorism on survivors as they face the challenge of recovery.  “In My Father’s House” is another tale of recovery that follows Grammy winning artist Che Smith on his journey to connect with his homeless father on the south side of Chicago. The film launched at the Tribeca Film Festival in 2015 and premiered on Showtime.Other notable films include the Emmy nominated “Burma Soldier” (HBO 2011). The film tells the story of a former junta member and Burmese soldier who risks everything to become a pro-democracy activist. “Burma Soldier” was nominated for a 2011 Irish Academy Award for Best Documentary.“Knuckleball!” (an MLB co-production) is a classic sports story that recounts the 2011 journey of the last professional knuckleball pitchers: Tim Wakefield and R.A. Dickey. Ricki and Annie are also the executive producers and directors of “The Fashion Fund,” a six part series that aired on Ovation in 2014 and Amazon in 2015. “The Fashion Fund” goes inside the CFDA/Vogue Fashion Fund which rewards emerging American design talent and features Anna Wintour, Diane von Furstenberg and other industry icons. Ricki’s additional credits include directing and producing “In My Corner” for POV/ PBS, Emmy nominated “Neglect Not The Children” (PBS) and as producer on HBO’s series “Autopsy I, II, III” and “Murder 9 to 5.” Ricki is the author of a children’s book series “Beryl Bean: Mighty Adventurer of the Planet” published by HarperCollins.Annie developed and produced the feature film “Tully,” nominated for four 2003 IFP Spirit Awards.  Additional directing and producing credits include the HBO 2009 series “Brave New Voices,” a four part special on the Mayo Clinic for Discovery (2004) and the 1996 Academy Award and Emmy winning “One Survivor Remembers,” a co-production of HBO and the U.S. Holocaust Memorial Museum.

“Hits unexpected high notes in tracking a musical about the stresses facing high school seniors as they look to life after.” – Stephen Saito, Moveable Fest