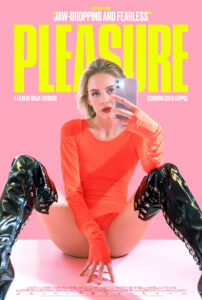 For updates and screenings go to: neonrated.com/films/pleasure

“An arresting workplace drama-meets-bildungsroman that demystifies the adult film industry without flat-out demonizing it – a delicate balance to strike.” – Aisha Harris, NPR

“If you’re curious what a feminist take on this world looks like, “Pleasure” might surprise you as much as it did me.” – Manohla Dargis,

“Nothing is that unfamiliar in the plot of Pleasure, but Thyberg, who hails from Sweden, approaches her subject with such a clinical gaze that it’s hard to shake the feeling that she’s doing something revolutionary” – Esther Zuckerman,

“Ninja Thyberg’s film makes a powerful statement about gender dynamics in the workplace, and the blurred lines of consent even in the post MeToo era.” – Natasha Alvar, Cultured Vultures

“A frank and difficult watch that tackles the adult film industry. Spontaneous and engaging. Kappel is fantastic in a role that requires a range of emotions.” – Nathaniel Muir, AIPT