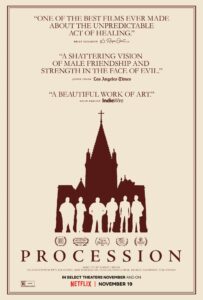 midwestern men all survivors of childhood sexual assault at the hands of Catholic priests and clergy come together to direct a drama therapy-inspired experiment designed to collectively work through their trauma. As part of a radically collaborative filmmaking process, they create fictional scenes based on memories, dreams and experiences, meant to explore the church rituals, culture and hierarchies that enabled silence around their abuse. In the face of a failed legal system, we watch these men reclaim the spaces that allowed their assault, revealing the possibility for catharsis and redemption through a new-found fraternity. As one of the

men says, “SPOTLIGHT was about trying to get in from the outside. In our film, we’re trying to get out.” Director Robert Greene (Kate Plays Christine, Bisbee ’17) joins us to talk about his collaboration with an extraordinary group of men, Joe Eldred, Mike Foreman, Ed Gavagan, Dan Laurine, Michael Sandridge and Tom Viviano as they begin the process of taking control of a narrative that has brought them immeasurable pain and rage, by telling their story of abuse on their own terms.

About the filmmaker – Robert Greene’s latest award winning film BISBEE ’17 premiered at the 2018 Sundance Film Festival. His previous film KATE PLAYS CHRISTINE won a Jury Award for Writing at Sundance 2016. Robert’s documentaries include the Gotham Awards-nominated ACTRESS, FAKE IT SO REAL and the Gotham Awards-nominated KATI WITH AN I. Robert was an inaugural Sundance Art of Nonfiction fellow in 2015 and is a three-time nominee for Best Director at the Cinema Eye Honors. The Independent named Robert one of their 10 Filmmakers to Watch in 2014 and he received the 2014 Vanguard Artist Award from the San Francisco DocFest. His first documentary, OWNING THE WEATHER, was screened at the COP15 Climate Change Conference in Copenhagen. Robert has edited over a dozen features, including HER SMELL (2018), GOLDEN EXITS (2017), QUEEN OF EARTH (2015) and LISTEN UP PHILIP (2014) by Alex Ross Perry, Amanda Rose Wilder’s award winning APPROACHING THE ELEPHANT (2014), Charles Poekel’s Spirit Awards-nominated CHRISTMAS, AGAIN (2015) and Douglas Tirola’s HEY BARTENDER (2013). He has been a Sundance Edit Lab Advisor and was on the U.S. Documentary Jury for Sundance 2017. Robert writes for outlets such as Sight & Sound and serves as the Filmmaker-in-Chief for the Murray Center for Documentary Journalism at the University of Missouri.

“What could have been a disaster in the hands of a less sensitive film-maker ends up an extraordinary feat of care, collaboration and creativity.” – Simran Hans, Observer (UK)

“An unrelentingly gripping and often disturbing film that dares to visualize (with taste and restraint) some of the vilest behavior the species is capable of.”  Matt Zoller Seitz, RogerEbert.com

“A shattering vision of male friendship and strength in the face of evil.” – Justin Chang, The Los Angeles Times

“Procession is, quite simply, one of the very best documentaries of 2021.” – Richard Propes, TheIndependentCritic.com

“The most high-stakes project of an eclectic career.” – Charles Bramesco, The Playlist