Inspired by a couple of true presidential corpse stories: the 1876 plot to steal 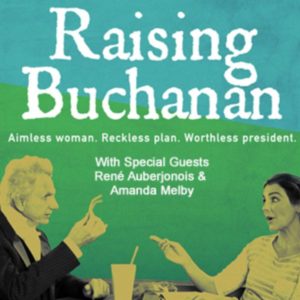 Abraham Lincoln’s body, and the exhumation of Zachary Taylor in 1991, RAISING BUCHANAN took the idea of presidential corpse stealing to extraordinary lengths of dark comedy delight with terrible dead presidents. Because there’s certainly something to be learned from terrible presidents, as well as laughing at them. Finding their inspiration in the off-kilter tone of the dramatically rooted comedies of Alexander Payne, the Coen Brothers, and Hal Ashby, the RAISING BUCHANAN stars Amanda

For news and updates go to: raisingbuchanan.com

“Auberjonois is so good as the feckless leader, nobly defending his poor decisions, that it makes you long for a full one-man show that will never come.” – Josh Bell, Crooked Marquee

“Surely, Buchanan was never going to earn the kind of cinematic lionization that so many American filmmaking greats (like Steven Spielberg and John Ford) gave to good old Abe Lincoln, but he could have done a whole lot worse than this.” – Nick Rocco Scalia. Film Threat