In “SEARCHING: Our Quest For Meaning In The Age Of Science,” 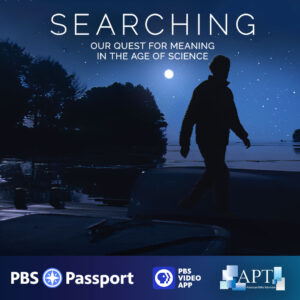 physicist and best-selling author Alan Lightman investigates how key findings of modern science help us find our bearings in the cosmos. What do these new discoveries tell us about ourselves, and how do we find meaning in them? Throughout the highly cinematic three-part series, Alan takes viewers along on his journey of exploration – from prehistoric paintings in a French cave to a giant subatomic particle accelerator in Switzerland; from a Harvard laboratory where biologists are attempting to create living cells from scratch to the laboratories

between contemporary scientific research and the humanities. Adding to the diversity of perspectives is a dynamic conversation  with Bina48, the world’s most advanced humanoid robot. Series producer and host Alan Lightman (Einstein’s Dream) joins us to talk about his journey to explore many of the vexing and eternal questions with a broad swath of the world’s leading thinkers, visionaries and doers. As well as working with award winning director Geoff Haines-Stiles (Carl Sagan’s triple Emmy and Peabody award-winning COSMOS, NOVA’s “Is Anybody Out There”.

For more go to: searchingformeaning.org

Part 1, “The Stars & The Osprey,” begins with Lightman’s late-night experience alone on the ocean when he felt connected to the stars, and ends with a memorable eye-to-eye encounter with a wild creature. Lightman attempts to reconcile these transcendent experiences with the material world of atoms and molecules.

Part 2, “The Big & The Small,” dramatizes the fact that humans are almost exactly the same distance – in terms of powers of ten – between an atom and a star. (If a human is 102 cm in size, an atom is 10-8 and the Sun is 1011.) But where do we fit in the moral universe? Alan speaks with the Dalai Lama, a rabbi and a bio-ethicist about the nature of consciousness, and the status of future Artificial Intelligences.

Part 3, “Homo Techno,” features stories – including that of a paralyzed former gang member who risked his brain to advance medical science – that prompt Lightman to think deeply about how advances in science and technology will impact our future evolution into what will perhaps be a new species: “Homo Techno” – part human and part machine. What essential human qualities will we want to preserve?

About the filmmaker – As both a physicist and a writer, Lightman is a rare talent. After years on the faculties of Harvard and the Massachusetts Institute of Technology (MIT), Lightman’s first novel, Einstein’s Dreams, became an international best-seller. Co-written and directed by award-winning public television science producer Geoff Haines-Stiles (Carl Sagan’s triple Emmy and Peabody award-winning COSMOS, NOVA’s “Is Anybody Out There” with Lily Tomlin, and Childhood), SEARCHING is filmed in Ultra HD format worldwide, and features state-of-the-art astronomical computer graphics along with a wide range of innovative story-telling techniques. ﻿