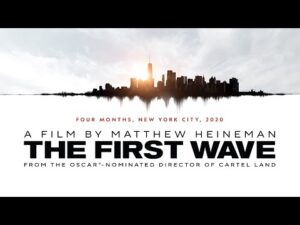 during the terrifying first four months of the pandemic, Oscar®-nominated and Emmy® Award-winning director Matthew Heineman’s THE FIRST WAVE spotlights the everyday heroes at the epicenter of COVID-19 as they come together to fight one of the greatest threats the world has ever encountered. Leaving a devastating trail of  death and despair, this once-in-a-century pandemic changed the very fabric of our daily 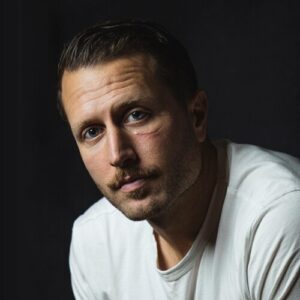 lives and exposed long-standing inequities in American society. Employing his signature approach of character-driven cinema vérité, Heineman embeds with a group of doctors, nurses and patients on the frontlines as they all desperately try to navigate the 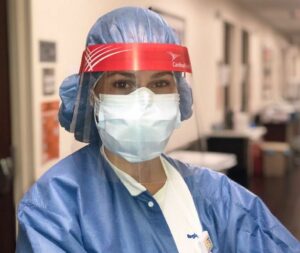 crisis. With each distinct storyline serving as a microcosm through which we can view the emotional and societal impacts of the pandemic, THE FIRST WAVE is a testament to the strength of the human spirit. Director Matthew Heineman (Cartel Land, City of Ghosts, Tiger) joins us to talk about the harrowing situation he and his crew found as they documented the once-in-a-century panemic testing the men and women, staff and patients, and how they channeled their filmmaking instincts into telling an emotionally charged story that illuminates what is was like to be a part of THE FIRST WAVE.

For news and updates go to: nationalgeographic.com/the-first-wave

For updates go to: neonrated.com/films/the-first-wave

About the filmmaker – Director / Producer / Writer Matthew Heineman is an Academy Award®-nominated and Emmy Award-winning filmmaker known for his sophisticated and immersive style. Heineman received a nomination for Outstanding Directorial Achievement of a First Time Feature Film Director from the Directors Guild of America for his narrative debut “A Private War” — making Heineman and Martin Scorsese the only filmmakers ever nominated for both narrative and documentary DGA Awards. He previously directed the documentary “Cartel Land,” which was nominated for an Academy Award and won three Primetime Emmy Awards and a DGA Award; “City of Ghosts” for which he won a DGA Award; and the docuseries “The Trade,” which just won two Emmys and was honored by the International Documentary Association as the Best Episodic Series of 2018. Heineman most recently directed and produced HBO’s “Tiger,” a two-part documentary on the legendary Tiger Woods, and “The Boy From Medellín,” chronicling the life of global superstar J. Balvin over a pivotal week in his life. Up next, he is set to write and direct “Paradise,” a narrative adaptation of the true events of the 2018 Paradise Fire. For more go to: ourtimeprojects.com

“A MUST-SEE. An intimate look at the bottomless, unimaginable depths of loss as well as the indefatigable reservoir of hope that sustains humanity during its darkest moments.” – Todd Gilchrist, TheWrap

“MASTERFULLY CRAFTED. A breathtaking testament to the fight to live, the calling to heal, and the power of human connection.” – Sheri Linden, The Hollywood Reporter

“Harrowing … Extraordinary. Heineman is offering a public service by reminding us of the worst of days, but still offering hope of a way out — as long as we heed the warnings. The more opportunities to see it, the better.” – Deadline

“CATHARTIC, HEALING, AND EMOTIONAL. It will never be more urgent than it is right now.” – David Ehrlich, IndieWire