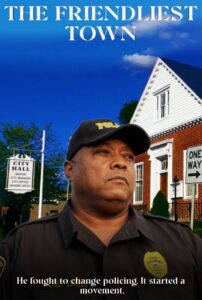 against the dedicated efforts of the first African American Police Chief, Kelvin Sewell in the small town of Pocomoke on Maryland’s lower Eastern Shore. The national debate over policing generally misses a critical point: how embedded law enforcement is in the political power structure of this country. Historically this has situated law enforcement at a critical juncture in conflicts regarding race, equity, and politics. This complex story made national news and shines spotlight on the insidious racism often just under the surface. Since the death of George Floyd at the hands of police, calls for substantive reform of law enforcement have launched an intense national debate. But an effort by veteran African American officer, Kelvin Sewell to implement community policing in the small racially divided town of Pocomoke

Accountability Report, and producers and co-creators of the award-winning podcast Truth and Reconciliation on Baltimore’s NPR affiliate WYPR). Director Stephen Janis and Subject Kelvin Sewell join us to talk about the many twists and turns this saga has taken over the last 6 years and why Sewell’s particular story is a clarion call for reforming law enforcement and criminal justice at every level of government.

For more on the work of Stephen Janis and Taya Graham go to: therealnews.com/police-accountability-report

Gravitas Ventures has released The Friendliest Town across North America (the United States and Canada) on all VOD/Digital & Blu-Ray/DVD platforms.

“This is a film steeped in social justice, empowerment and the promise of societal change.” – David Zurawik, Baltimore Sun