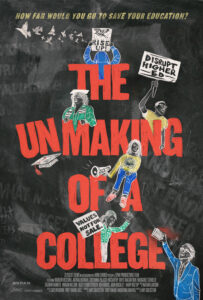 when students led a 75-day sit-in – the longest in American college history – at the new president’s office to thwart her underhanded attempt to shut down one of the most experimenting colleges in the United States.  Hampshire College was founded 50 years ago based on the seminal book “The Making Of A College” to radically reimagine liberal arts education. Inspired by this philosophy of critical thinking, a collection of dedicated and charismatic students went on a rescue mission with a coalition of undergrads, faculty, staff, and alumni to find out who was leading the threat to their college, and why. The thrilleresque unfolding of this singular 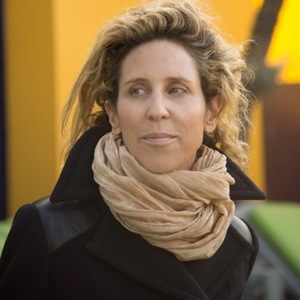 story goes beyond a single school, and foretells a looming crisis in higher education at a time when many colleges are failing. If Hampshire were to close, what would that mean for colleges and universities throughout the country? This is also a story of young people moved to action, how they were changed forever by their choices and how they are becoming our future leaders. THE UNMAKING OF A COLLEGE is constructed from a mix of 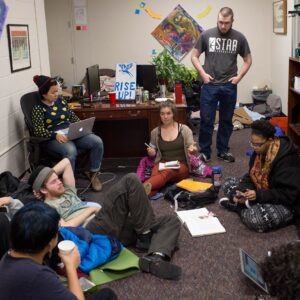 video captured by the students and their social media threads, traditional observational footage, press conferences, news footage, and radio broadcasts. Hampshire alum, Amy Goldstein, weaves their powerful documentation with interviews with students, professors, whistleblowers, and alumni including filmmaker Ken Burns, into a suspenseful and raucous ode to democracy in action. Director Amy Goldstein (Kate Nash: Underestimate the Girl) joins us for a spirited conversation on the importance a Hampshire-like education can have on the future of students attuned to their approach, following her storytelling instincts, and the potential of all of us to collectively impact the world toward a better future.

For news and updates go to: unmaking-of-a-college

Zeitgeist Films in association with Kino Lorber is proud to present the US theatrical release of THE UNMAKING OF A COLLEGE, the documentary film directed by Amy Goldstein (Kate Nash: Underestimate the Girl) and produced by Anouchka van Riel and Troy Takaki. The film will open at the IFC Center in New York on February 11, and at Laemmle Theaters in Los Angeles on February 18. Other cities will follow.

About the filmmaker – Amy Goldstein is a director, producer, and screenwriter of television series, feature films and music videos. She seeks out daring people fighting the battles for democracy, justice and self-expression, an approach to life that she developed while attending Hampshire College. Her latest documentary, KATE NASH: UNDERESTIMATE THE GIRL (IDFA, Doc NYC, Sheffield Doc Fest, Doc Edge) was made for Storyville BBC and was released theatrically by Alamo Drafthouse in the United States, Level Film in Canada, and qualified for an Academy Award in 2021. The film follows musician Kate Nash as she goes from brutally honest pop star to struggling artist to a woman now in control of her career. Other documentary films recently completed include SELF-MADE MEN (ITVS), an episodic docu-comedy about two publishers who created a transmen magazine and THE HOOPING LIFE (a Cinedigm release), an epic tale of a female-driven subculture. Prior to documentary filmmaking, Amy directed music videos (Rod Stewart’s DOWNTOWN TRAIN MTV #1) and scripted features (BECAUSE THE DAWN, a lesbian vampire musical, THE SILENCER, an action satire of exploitation films, award-winning EAST OF A, an edgy comedy starring Rashida Jones and David Alan Grier about an alternative family facing the challenges of raising a child with HIV). Her work has been presented at film festivals worldwide, including Toronto and Berlin. She also developed pilots for HBO, CBS, Fox, Showtime, and MTV. Amy served on the board of Outfest and is a member of the WGA and DGA. She graduated from Hampshire College and NYU Graduate Film School.

“The Unmaking of a College focuses on Hampshire College, a small liberal arts college in Massachusetts. Hampshires story is the story of American higher education at hyper-speed.” – Ray Lobo, Battle Royale With Cheese