THREE MINUTES – A LENGTHENING explores the human stories hidden within 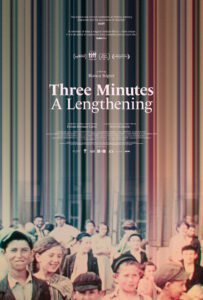 the celluloid. This powerful and emotionally compelling documentary presents a home movie shot by David Kurtz in 1938 in a Jewish town in Poland and tries to postpone its ending. The film is a haunting essay about history and memory. As long as we are watching, history is not over yet. The three minutes of footage, mostly in color, are the only

moving images left of the Jewish inhabitants of Nasielsk before the Holocaust. Those precious minutes are examined moment by moment to unravel the human stories hidden in the celluloid. Different voices enhance the images: Glenn Kurtz, grandson of David Kurtz, and Maurice Chandler, who appears in the footage as a young boy. AcademyAward winning filmmaker Steve McQueen (12 Years

a Slave). BAFTA Award winning actress Helena Bonham Carter narrates the film. Director Bianca Stigter joins us for a conversation on her own journey in pursuit of the people behind a providential 16mm home movie, finding an invaluable eye witness from Nasielsk, and working with the son of Glenn Kurtz, David.

For news & screenings go to: superltd.com/three-minutes-a-lengthening

Watch Three Minutes – A Lengthening starting Friday, August 19th at the Laemmle Royal in Los Angeles and in New York at theQuad Cinemas 4

Director’s Statement – As a child, David Kurtz emigrated from Poland to the United States. In 1938 he returned to Europe for a sightseeing trip and whilst there he visited Nasielsk, the town of his birth. Specifically for this trip, he bought a 16mm camera, then still a novelty rarely seen in a small town never visited by tourists. Eighty years later his ordinary pictures, most of them in color, have become something extraordinary. They are the only moving images that remain of Nasielsk prior to the Second World War. Almost all the people we see were murdered in the Holocaust. On Facebook, I stumbled upon a book written about this film, Three Minutes in Poland by Glenn Kurtz. The title fascinated me. I ordered the book and watched the footage, which can be found on the website of the United States Holocaust Memorial Museum. While watching, I wondered: could you make those three minutes last longer, to keep the past in the present? –  Bianca Stigter

About the filmmaker – Writer and Director  Bianca Stigter is a historian and cultural critic. She made the short film essays Three Minutes -Thirteen Minutes – Thirty Minutes (2014) and I Kiss This Letter – Farewell Letters from Amsterdammers (2018). She is associate producer of Steve McQueen’s feature films 12 Years a Slave and Widows. In 2019 she published the book Atlas of an Occupied City: Amsterdam 1940-1945.

“There is a lengthening here – but also a shortening of the emotional distance between us the viewer and those caught on camera.” – Amber Wilkinson, Eye for Film

“The history itself is devastating, but Stigter recognizes a tragedy still unfolding in how fragile the stock it’s printed on is.” – Stephen Saito, Moveable Fest

“A masterpiece that uses the medium of cinema with exemplary creativity and passion to preserve history and create a monument.” – Ricardo Gallegos, La Estatuilla

“An original and incisive meditation on history, memory, memorials and the very nature of celluloid.” – Alissa Simon, Variety