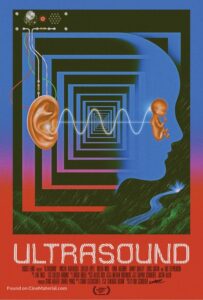 a heavy rainstorm, Glen experiences car trouble. Near where his car gets stuck, he spots a house, knocks on the door and is greeted by an oddly friendly middle-aged man, Arthur (Bob Stephenson), and his younger wife, Cyndi, (Chelsea Lopez). The strange couple pours him a drink, and then more

drinks, followed by an unexpected offer that Glen can’t refuse. Elsewhere, a young woman, Katie (Rainey Qualley), is feeling emotionally weighed down by a secret romantic arrangement that feels like a textbook case of gaslighting. And at the same time, in a nondescript research facility, medical professional Shannon (Breeda Wool) begins questioning her role in a bizarre experiment, fearing that she’s doing more harm than

good. Director Rob Schroeder joins us for a conversation on his collaboration with Conor Stechschulte (Generous Bosoms) and Cinematographer Mathew Rudenberg (Sun Choke) in this mind bending story of deception, manipulation. political power and altered reality.

For news and updates go to: magnetreleasing.com/ultrasound

Watch at home at magnetreleasing.com/ultrasound

About the filmmaker – Rob Schroeder began his film career as a music video director and independent producer. He co-founded Lodger Films in Los Angeles and currently produces and directs the Emmy®-winning PBS series “Variety Studio: Actors On Actors,” now in its 14th season. ULTRASOUND is his feature film directorial debut.

“Schroeder’s feature debut is an assured and entertaining puzzle that has cult classic written all over it. It comes highly recommended to fans of Christopher Nolan’s work like Memento.” – Martin Unsworth, Starburst

“A technical and narrative stroke of brilliance, Ultrasound is an ever expanding slice of science fiction that could easily be the baby of David Cronenberg.” – Kat Hughes, THN

“…creating a film which is both captivating and breath-taking.” – Rob Aldam, Backseat Mafia

“a hypnotic, paranoid experiment in the sort of psychological manipulations that are the natural province of advertisers, abusers, agents of social control – and of course filmmakers.” – Movies on Weekends