In this searing documentary, WELCOME TO CHECHNYA, Academy Award – 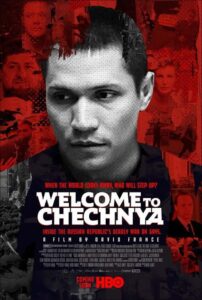 nominated director David France (How To Survive A Plague) brings us a terrifying real-life thriller that shadows a group of brave activists risking their lives to confront the ongoing anti-LGBTQ persecution in the repressive and closed Russian republic of Chechnya. In recent years, tens of thousands of LGBTQ people in the republic have suffered detention, torture and sometimes death at the hands of the authorities. But a small network of queer activists have mobilized into action, smuggling people in need out of their communities, securing visas and sheltering

them in safe houses. Shot with astonishing access, largely with hidden cameras that keep rolling throughout every moment of escape, and employing a revolutionary face-swapping technique to protect the anonymity of its endangered

subjects, WELCOME TO CHECHNYA exposes these under-reported atrocities, while highlighting an extraordinary group of heroic people confronting a brutal system. Director David France joins us for a conversation on the remarkably effective facial technology used by France to protect the identity of the film subjects and on the Russian republic’s pogrom against defenseless people being tortured and killed because of their sexual identity.

For news and updates go to: welcometochechnya.com

Director’s Statement: In my work as a journalist and author over many years, I have focused closely on the stories of outsiders and people who society has pushed to its margins – the disregarded, the ignored, the hated. When I turned to documentary filmmaking, I chose outsider activism as my subject. My first film, HOW TO SURVIVE A PLAGUE, documented the work of early AIDS activists, ordinary people with no training who marshalled the intricate details of virology to change the course of the epidemic. Next, I opened up the story of early gender radicals in THE DEATH AND LIFE OF MARSHA P. JOHNSON, which chronicled not only the founding of the modern LGBTQ movement but also the founding of the first transgender rights organization in 1970. WELCOME TO CHECHNYA completes this trilogy. It follows a group of ordinary humans who have done something extraordinary, and asks the question that has long preoccupied me: What makes a person assume enormous risk and responsibility when others might turn the other way?  What does it take, in other words, to be a hero?When I left their underground pipeline for the last time, knowing I could never go back once it became known I was reporting on their work, I wept with gratitude for the work they are doing. And for the opportunity they gave me to witness bravery of the most unvarnished kind: selfless, humane, and entirely queer. – David France

“No one has ever found such a deep and humanitarian use of a ‘deep fake’.” – Zep Armentano, El Cinefil

“David France has created a true masterwork of LGBT empathy, working both as a devastating portrait of hate as well as a rallying cry to arms. This is one of the best documentaries of the year.” – Redmond Bacon, Culture Vultures

“Welcome to Chechnya is as fearless as its subjects, unafraid to show the violence and emotional torture of these people.” – Brian Tallerico, RogerEbert.com