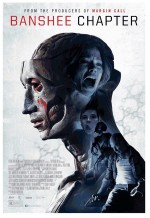 BANSHEE CHAPTER follows investigative journalist, ANNA, researching a missing friend who ingested an undocumented research chemical once tested on civilians by CIA MK-Ultra experiments. The labyrinthine trail of evidence leads her into the disturbing world of black ops chemical tests, unexplained radio transmissions and disfigured entities in the blackness of night. Anna will do anything to uncover what lies behind her friend’s disappearance but to her horror the entities are coming after her. Suspense-thriller based on true events shot in stereoscopic 3D starring Katia Winter and Ted Levine. Director and writer Blair Erickson joins us to talk about the challenges of successfully mixing history and horror into a convincing and frightening film.

Blair Erickson’s The Banshee Chapter is a relentless bit of horror that mixes governmental conspiracies and psychedelic drugs for one hell of a traumatizing trip. – Matt Donato, We Got This Covered

It works as a gonzo exposé of some of the 20th century’s madder moments – but perhaps more importantly, this psychotropic remapping of history never forgets to be proper jump-out-of-your-seat scary. Think of it as Fear and Loathing in Chamber 5… – Anton Bitel, Grolsch Film Works

“The Banshee Chapter is one worth killing the lights, turning off the cell and letting it build to its effective, nerve-fraying crescendo, which is exactly what horror films set out to do, but few seldom reach.” – Influx Magazine