The highly entertaining new documentary What She Said: The Art of Pauline Kael is an unvarnished portrait of a pioneer who was both admired and resented for what she said 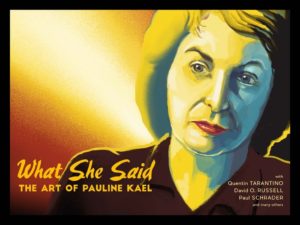 about art in an era of great moviemaking. New Yorker film critic Pauline Kael battled to make her mark — fueled by brilliance, unshakable self-confidence, a complicated past, and a deep love of the arts. In a field that has historically embraced few women film critics, Kael was charismatic, controversial, witty, and discerning. Her decades-long berth at The New Yorker energized her fans (“Paulettes”) and infuriated her detractors on a weekly basis. Her turbo-charged prose famously championed the New Hollywood Cinema of the late 1960s and ‘70s (BONNIE AND CLYDE, NASHVILLE, CARRIE, TAXI DRIVER) and the work of major European directors (François Truffaut, Bernardo Bertolucci), while mercilessly panning some of the biggest studio hits (THE SOUND OF MUSIC, MIDNIGHT

COWBOY, DIRTY HARRY). Her creepy battle with Andrew Sarris and his auteur theory was legendary, and her stint in Hollywood, trying her hand at producing, was a disaster. What She Said: The Art of Pauline Kael includes over 35 new interviews and never-before seen archival material. Sarah Jessica Parker reads from Kael’s reviews; filmmakers Quentin Tarantino, Paul Schrader, and Francis Ford Coppola and critics Camille Paglia, Molly Haskell, Greil Marcus, and David Edelstein speak to her enormous gifts and influence. Director, editor and producer Rob Garver joins us for a conversation on the life and impact of an iconoclastic, gifted, generous, vindictive writer and fierce champion of film and filmmakers.

“The most powerful, loved, and hated film critic of her time.” – Roger Ebert on Pauline Kael

For more on the film go to: paulinekaelmovie.com

“Garver’s film blossoms into something more comprehensive than complimentary, a film that doesn’t balk at the trickier aspects of Kael’s career, even as it never fully engages with the tensions that informed her.” – Kate Erbland, indieWire

“Garver’s film also works as a great overview of the sweeping changes in both filmmaking and film culture over the course of her career from the perspective of someone in and yet not of the industry.” – Glenn Dunks, The Film Experience

“An exquisitely crafted documentary about the woman who was arguably the greatest movie critic who ever lived…” – Owen Gleiberman, Variety

“Garver’s film is above all a celebration of the pleasure of intellectual and emotional response to art… and a picture of a style of thinking that might be seen as distinctively but non-stereotypically female.” – Jonathan Romney, Screen International