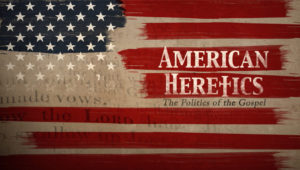 two of the most visceral things you can think of in terms of the human experience, and they’ve locked them in partisan identities.” The latest documentary from filmmakers Jeanine Butler and Catherine Lynn Butler AMERICAN HERETICS: THE GOSPEL OF POLITICS takes audiences into the buckle of Bible belt where a group of defiant ministers, congregations, and community leaders are challenging deeply rooted fundamentalist Christian doctrine in favor of a Gospel of Inclusion.

Labeled as “heretics” for their beliefs and actions, they refuse to wield their faith as a sword sharpened by literal interpretations of the Bible. Especially those fundamentalist  Christian interpretations that continue to justify nationalism and hack away at landmark civil rights protections for women, minorities, immigrants, and the LGBTQ communities. This poignant story challenges what we think we know about the Christian heartland by offering a rare

personal glimpse into the contentious and often misunderstood history of religion, race, and politics in America. These Heretics are still interested in saving you from hell, but’s the earthly one, where poverty, discrimination and nationalism oppresses “…those who are the least among us.” Director / Producer Jeanine Butler (Documenting the Face of America) and Producer Catherine Lynn Butler (Journey of the Universe) stop by to talk about their journey into America’s Bible Belt and the growing movement to embrace a more tolerant perspective of spiritual enlightenment.

For news and updates go to: americanhereticsthefilm.com

“‘American Heretics: The Politics of the Gospel’ doesn’t break ground cinematically, but it is eye-opening in other ways.” – Ben Kenigsberg, New York Times

“All the usual theological arguments for a loving rather than discriminatory faith are here” – Luke Y. Thompson, Forbes

“It makes passionate arguments. It offers a ray of hope. And it evokes the sense that those most desperately in need of seeing it will never cross its path.” – John Anderson, America Magazine

“A film that shines a light on those who would be a candle in the midst of the Medieval darkness of modern, white Southern American Christianity.” – Roger Moore, Movie Nation