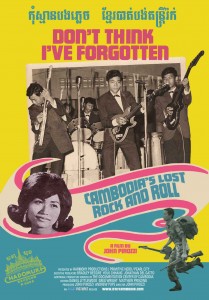 During the 60’s and early 70’s as the war in Vietnam threatened its borders, a new music scene emerged in Cambodia that took Western rock and roll and stood it on its head – creating a sound like no other. Cambodian musicians crafted this sound from the various rock music styles sweeping, America, England and France, adding the unique melodies and hypnotic rhythms of their traditional music. The beautiful singing of their renowned female vocalists became the final touch that made this mix so enticing. DON’T THINK I’VE FORGOTTEN: CAMBODIA’S LOST ROCK AND ROLL tracks the twists and turns of Cambodian music as it morphs into rock and roll, blossoms, and is nearly destroyed along with the rest of the country. DON’T THINK I’VE FORGOTTEN provides a new perspective on a country usually associated with only war and genocide. The film is a celebration of the incredible music that came from Cambodia and explores how important it is to Cambodian society both past and present. Director John Pirozzi joins us for a conversation on Cambodia’s rich cultural heritage and the phenomenal courage and conviction of the artists who remained true to their vision even when faced with horrific repercussions.

For news and updates go to: dtifcambodia.com/

“A rich and defiant effort at recovery, showing that even the most murderous totalitarianism cannot fully erase the human drive for pleasure and self-expression.” —New York Times – A.O. Scott (NYT Critics’ Pick)

“As expressionistic as it is journalistic, Don’t Think I’ve Forgotten triumphs as both an objective record and a poetic lament: It’s a film that’s every bit as entrancing and haunting as the lost music it celebrates.” —A.V. CLUB (rating: A-)

“More than a music documentary.” –Spectrum Culture