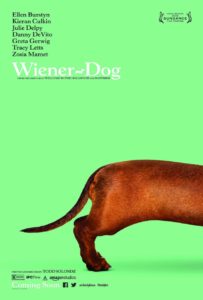 “I love dogs and would love one of my own, the only problem being that I don’t like walking them or feeding them or cleaning them or having to stay home because of them. When I was a child we (my family) went through a lot of them, and they never lasted very long.” – WIENER-DOG Director Todd Solondz.

WIENER-DOG is a dark, starkly funny story of a single dog and the many different people she touches over her short lifetime.  Man’s best friend starts out teaching a young boy some contorted life lessons before being taken in by a compassionate vet tech named Dawn Wiener. Dawn reunites with someone from her past and sets off on a road trip. After leaving Dawn, Wiener-Dog encounters a floundering film professor, as well as an embittered elderly woman and her needy granddaughter—all longing for something more.  Solondz’s perversely dark comedy offers an appallingly honest look at the American experience, brought to life by its all-star cast.  As to be expected, WIENER-DOG has all the characteristics of the Solondz oeuvre — quick wit, dark tragedy, familiar characters, and an incredible ensemble cast—but the film’s brainchild also found inspiration in classic films. As Solandz says, “The touchstones were movies like AU HASARD BALTHAZAR and BENJI. In between those two is where I think this film lies.” Solandz joins us to talk about the making of Wiener Dog and the state of independent filmmaking in 2016.

For news and updates go to: ifcfilms.com/films/wiener-dog

“En route to the harshest, most unremittingly bleak film of his career, Solondz unleashes some of his sharpest commentary on human mortality and regret” – Joshua Rothkopf, Time Out

“Solondz gives no quarter, nor does he mince words about where we’re all headed. His vision of our predicament is bleakly funny and weirdly heartfelt.” – Ella Taylor, NPR