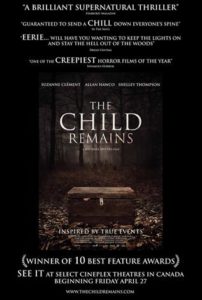 Thompson (Labyrinth) and genre hero Geza Kovacs (Scanners, The Dead Zone), THE CHILDREMAINS is a character-driven, psychological scary movie for adults that will leave audiences breathless. Director Michael Melski stops by to talk about the real-life horror story behind THE CHILD REMAINS, filming in his hometown in beautiful Nova Scotia and putting together a first rate cast of accomplished actors.

For news and updates go to: thechildremains.com