BEAUTY AND THE DOGS tells the harrowing story of Mariam, an attractive young Tunisian woman, starts off the evening in carefree spirits at a student party with her 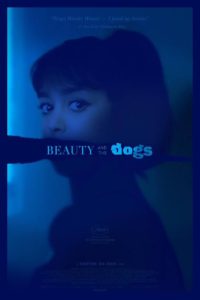 girlfriends, where she meets a handsome young man and goes for a walk with him on the beach in the moonlight. In the next scene, she is seen disheveled, running through the streets at night, flinching at every passing car, with her male companion trailing behind. She has been raped by police officers. But her harrowing ordeal has just begun, as she attempts to find help, report the crime, and seek justice, battling overwhelming obstacles to make those guilty accountable. Employing impressive cinematic techniques and anchored by a fiery tour-de-force performance from newcomer Mariam Al

Ferjani, Beauty and the Dogs tells an urgent, unapologetic, and important story head-on. A rare film from a female Tunisian writer and director, Kaouther Ben Hania’s startling drama is a striking critique on a repressive society and a forcefully feminist rallying cry. Director and writer Kaouther Ben Hania stops by to talk about her moving portrait of a woman who slowly but surely comes to grips with her increasingly desperate situation.

For news and updates go to: Beauty and the Dogs site at Oscilloscope Films

Beauty and the Dogs is playing at the NuArt Theatre in Los Angeles beginning Friday, March 23 (check out the Nuart listing)

“Beauty and the Dogs plays like an actual, unending nightmare.”

“A crescendo of humiliation, anxiety and abuse, “Beauty and the Dogs” plays like a horror movie where every choice is a Catch-22 and every door a trap.” – Jeanette Catsoulis, New York Times

“Her experience becomes an incendiary account of bureaucracy built to overwhelm, a complex commentary on political capital and how justice for one can be justice for all.” – Jared Mobarak, Film Stage

“It’s not an easy watch. But, with its feminist spin on the continued battle for basic legal rights following the 2011 ousting of Tunisia’s Ben Ali regime, it feels like an important one.” – Wendy Ide, Screen International