The Peacemaker is an intimate portrait of Padraig O’Malley, an international peacemaker who helps make peace for others but struggles to find it for himself. 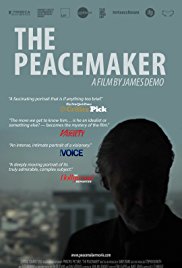 At the heart of the world’s seminal conflicts is an international peacemaker riddled with internal strife. Padraig O’Malley has made it his life’s work to bring leaders on both sides of the most explosive conflicts to the same table. His innovative behind the-scenes work has established Padraig as a publicly unrecognized but highly influential figure in conflict resolution. Yet, these dramatic undertakings serve as a sharp contrast to the man – an alcoholic bar owner who fails to manage the most basic of personal relationships. His solitary life hangs in a delicate balance, bound together by weekly AA

meetings and relentless work. As age takes its toll, he begins to lose his only source of solace and the motivation behind his life’s work comes into question. The Peacemaker plunges us into the depths of the journey of a man utterly defined by conflict. The film takes us from Padraig’s isolated life in Cambridge, Massachusetts to some of the most dangerous crisis zones on Earth – from Northern Ireland to Kosovo, Nigeria to Iraq – as he works a peacemaking model based on his recovery from addiction. We meet Padraig in the third act of his life in a race against time to find some kind of salvation for both the world and himself. Director James Demo joins us to talk about his film and the conflicted man working to resolve turmoil internally and in the world.

For news and updates go to: peacemakermovie.com

THE PEACEMAKER filmmaker James Demo and the film’s subject, Padraig O’Malley, will participate in Q&A’s after the 4:40 PM screenings at the Music Hall on Saturday and Sunday, March 24 and 25.

“The weight of the world is evident in O’Malley’s dour gaze, but it’s clear too, in Demo’s sensitive, piercing portrait, that the endless job he’s carved out for himself is his lifeblood, and its own kind of addiction.” – Sheri Linden, Los Angeles Times

“The more we get to know him, the more his core motivation – is he an idealist or something else? – becomes the mystery of the film.” – Owen Gleiberman, Variety

“An intense, intimate portrait of a visionary capable of sophisticated analysis, abrupt anger, self-deprecating wit, and profound insights – all while existing at considerable remove from his fellow man.” – Daphne Howland, Village Voice

“The movie is a fascinating portrait that is if anything too brief.” – Glenn Kenny, New York Times