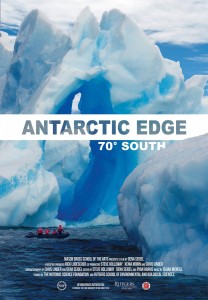 A thrilling journey to one of the world’s most perilous environments, Antarctic Edge: 70° South follows a team of world-class scientists as they explore the West Antarctic Peninsula.  In the wake of devastating climate events like Superstorm Sandy and Hurricane Katrina, oceanographer Oscar Schofield teams up with a group of researchers in a race to understand climate change in the fastest winter-warming place on earth: the West Antarctic Peninsula.  For more than 20 years, these scientists have dedicated their lives to studying the Peninsula’s rapid change as part of the National Science Foundation’s Long-Term Ecological Research Project.   Antarctic Edge brings to us the stunning landscapes and seascapes of Earth’s southern polar region, revealing the harsh conditions and substantial challenges that scientists endure for months at a time. While navigating through 60-foot waves and dangerous icebergs, the film follows the team as they voyage south to rugged, inhospitable Charcot Island to study the fragile and rapidly declining Adelie Penguin. Filmmaker Dena Seidel spent six weeks filming the feature-length documentary Antarctic Edge: 70°, completed with the participation of 14 undergraduate students from the Rutgers Center for Digital Filmmaking. An award winning documentary filmmaker and published author, Seidel join us to discuss the results and the ramification of the research highlighted in this enlightening and entertaining film.

Antarctic Edge: 70° South will open in Los Angeles on May 15 at Laemmle Music Hall.

“‘Antarctic Edge: 70° South’ takes viewers to a spot where surveying is so scarce that the destinations may diverge from their locations on a map. ‘Antarctic Edge’ illustrates its points effectively, providing vivid evidence of how shrinking ice at the South Pole affects climates across the globe.” – Ben Kenigsberg, The New York Times

“‘Antarctic Edge: 70° South’ compellingly follows oceanographic scientists as they grapple with the escalating effects of climate change. Stirringly shot, intimately and vividly documented, it is a moving portrait of individuals who devote their lives to understanding the environmental shifts that all too soon might manifest themselves on our own altered shorelines.” – Michael Rechtshaffen, Los Angeles Times