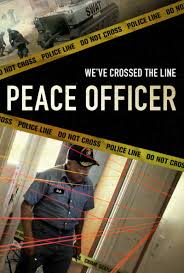 Peace Officer is a documentary about the increasingly militarized state of American police as told through the story of ‘Dub’ Lawrence, a former sheriff who established and trained his rural state’s first SWAT team only to see that same unit kill his son-in-law in a controversial standoff 30 years later. Driven by an obsessed sense of mission, Dub uses his own investigation skills to uncover the truth in this and other recent officer-involved shootings in his community, while tackling larger questions about the changing face of peace officers nationwide. In Peace Officer, these events are contextualized within a growing national phenomenon of violent SWAT raids and governmental immunity laws gone amok in the War on Drugs. Officers both in cities and small towns like Dub’s are routinely armed with military surplus weapons and equipment, and federal incentives to use what they are given. All of this has lead to a 15,000% increase in SWAT team raids in the United States since the late 1970’s. Peace Officer follows Dub as he obsessively picks apart these cases from his unique perspective that combines the zeal of a rule-of-law detective with the grief of a victim. Co-director Scott Christopherson and film subject William “Dub” Lawrence joins us to talk about the history and ramifications of a world where military-inspired tactics and overwhelming firepower are used on people suspected of criminal activity.

For news and updates go to: peaceofficerfilm.com

Opening on Friday, September 18th at the Nuart Theater in Los Angeles with a Q & A after the Friday and Saturday 7:30 PM screening with Director Scott Christopherson and William “Dub” Lawrence.

“The first major documentary on a topic of fast-rising public interest — the increasing militarization of U.S. police departments — “Peace Officer” turns out to be as engrossing and well crafted as it is timely” — VARIETY

“Brad Barber and Scott Christopherson’s half “The Thin Blue Line” – style crime procedural, half political study about the militarization and overreach of police, is a refreshingly objective and levelheaded documentary that’s as culturally relevant as it is expertly paced and captivating.” — INDIEWIRE

“Scott Christopherson & Brad Barber’s “Peace Officer” is the most level-headed treatment I have seen so far in the growing debate over police use of deadly force.” — ROGEREBERT.COM