The riveting and illuminating documentary, Islam and the Future of Tolerance follows prominent atheist philosopher Sam Harris and Islamist-turned-liberal- 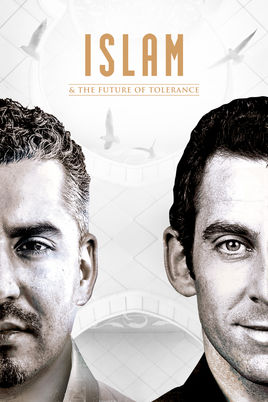 Muslim Maajid Nawaz, after publicly clashing in a debate over the concept of Islamic reform in the Muslim world. The two men reconnect several years later in an attempt at civil and honest dialogue. Sam and Maajid attempt to explore their real or imagined divides by clearly and rationally dissecting their disagreements. Through the course of their discussions, they tackle troubling passages from the Quran, the importance of the precision of language and terms (such as “Jihadism,” “Islamists,” and “radical,”) and the difficulty in

finding helpful and honest responses in a fraught political terrain. Ultimately, this unlikely collaboration sheds light on the many confusions that afflict the public conversation about Islam and emphasizes how the virtues of open dialogue can help foster both understanding and tolerance in an increasingly polarized world.

a leading voice of the “New Atheist” movement, along with Christopher Hitchens, Richard Dawkins, and Daniel Dennett. He spent much of the next decade writing books such as The End of Faith, Letter to a Christian Nation,and The Moral Landscape and publicly engaging religious scholars and apologists in highly contentious conversations.

Maajid Nawaz was arrested and thrown into an Egyptian prison, where he spent four years  before beginning his slow journey out of radical Islamism. By the time he emerged, he had decided to dedicate his life’s work to reforming Islam from within. He started Quilliam, a counter-extremism organization.

Islam and the Future of Tolerance tells the story of an unlikely conversation on a topic of grave importance, and how it changed two foes into friends. Director Jay Shapiro joins us to talk about his engaging and enlightening documentary.

For news and updates go to: islamandthefutureoftolerance.com

“For these reasons and more, the film serves as a rewarding introductory course to the school of thought that Sam Harris and Maajid Nawaz are a part of.” – Hunter Lanier, Film Threat

“Anyone can wrangle a group of talking heads in front of a camera or audience to bloviate on the merits of religious belief, but Avila and Shapiro’s purposes are more urgent and pressing.” – Nathanael Hood, The Young Folks

“A talkative film in which the very act of talking about this subject is a first tiny victory.” – Roger Moore, Movie Nation

“Nevertheless, in a society that’s always demanding that minorities do the hard work of explaining themselves, only to deny them the chance to do so, this is a bold attempt to do things differently.” – Jennie Kermode, Eye for Film