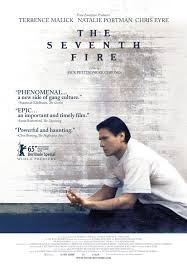 From executive producers Terrence Malick, Natalie Portman, and Chris Eyre comes this haunting and unflinching debut feature, THE SEVENTH FIRE, directed by Jack Pettibone Riccobono. When gang leader Rob Brown is sentenced to prison for a fifth time, he must confront his role in bringing violent drug culture into his beloved American Indian community in northern Minnesota. As Rob reckons with his past, his seventeen-year-old protégé, Kevin, dreams of the future: becoming the most powerful and feared Native gangster on the reservation. Director, Producer, Writer, and Director of Photography Jack Pettibone Riccobono has produced and directed a wide range of work across the five boroughs of his native New York City and around the world, from Moscow to Shanghai to Freetown. His narrative short KILLER premiered at New Directors / New Films and won Best Short at the Nantucket Film Festival. His short documentary THE SACRED FOOD, shot on the same reservation as THE SEVENTH FIRE, premiered at the Berlin Film Festival. Riccobono joins us for a conversation on the chronic unemployment and sense of desperation that permeates Native American reservations like Pine Point as well as the sliver of hope that may point to a brighter future.

For news and updates go to: theseventhfire.com

“The betrayal of Native Americans by larger forces looms over this powerful movie without ever being explicitly discussed.” – Glenn Kenny, New York Times

“Riccobono films it all with intelligence, sensitivity and a feel for offhand poetry; his camera captures moments of intimacy and tension without ever quite intruding.” – Bilge Ibiri, Village Voice

“This documentary, by the first-time director Jack Pettibone Riccobono, is a deep drink of bleak. But there are incidental moments of beauty or startling surreality to marvel at “ – Leslie Pelperin, Guardian

“Bracingly candid in both tone and image.” – Mathew Anderson, CineVue