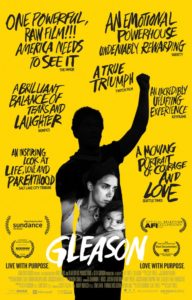 GLEASON is the powerful, inspiring story of Steve Gleason and his mission – after being diagnosed with ALS – to leave a legacy for his son and make the world a better place for all people with neurological disorders. At the age of 34, Gleason, a former NFL defensive back and New Orleans hero, was diagnosed with ALS and given a life expectancy of two to five years. Weeks later, Steve and his wife Michel discovered that Michel was pregnant with their first child. Director Clay Tweel’s GLEASON masterfully assembles roughly four years of footage, including personal and surprisingly humorous video journals shot by Gleason himself for his then-unborn son Rivers, and the athlete’s globe-trotting adventures undertaken as part of his mission to live his life to the fullest. What emerges from this incredibly intimate portrait is not only a showcase of an astonishing assertion of the human spirit, but, more importantly, a powerful and inspirational look at life, love and family, and the intense bonds between husbands and wives and fathers and sons, in sickness and in health. GLEASON premiered to standing ovations and widespread critical acclaim at the 2016 Sundance Film Festival before garnering an audience award at the recent SXSW Film Festival. Director Clay Tweel (Finders Keepers, Print the Legend) joins us to talk about getting to know Steve and Michel, witnessing the day-to-day challenges that come with the devastating impacts of ALS and the process of editing down over 1,300 hours of video.

For news and updates go to gleasonmovie.com

To see Steve, Michel, Clay and others from Gleason at Q&A screenings on July 29 and 30 go to: gleasontickets.com theaters

“There are moments of such raw, intimate anguish in this film that you can’t help but turn away.” – Bilge Ebiri, Village Voice

“One of the most powerful, poignant documentaries of the past decade.” – Nick Schager, The Daily Beast

“Tweel’s approach is no-frills, with much of the footage having been shot by Gleason and his wife Michel. This is wise: The story itself is so wrenching that any attempt to gussy it up would run the risk of feeling overwrought, even manipulative.” – Mike Nordine, The Wrap

“Having followed [Gleason] from the start, we can’t help but see the active mind inside that body, one full of love for his family and determination to stay with them as long as he can.” – John DeFore, Hollywood Reporter