Will (Ben Foster) and his teenage daughter, Tom (Thomasin Harcourt McKenzie), have lived off the grid for years in the forests of Portland, Oregon. When their idyllic 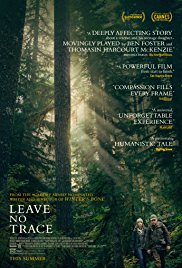 life is shattered, both are put into social services. After clashing with their new surroundings, Will and Tom set off on a harrowing journey back to their wild homeland. The film is directed by Debra

Granik (Winter’s Bone) from a script adapted by Granik and Anne Rosellini and based on the novel My Abandonment by Peter Rock. Director Debra Granik joins us to talk about her modern day tale of two people grappling with a sense of place, loyalty, love, and deep wounds.

For news and updates go to: bleeckerstreetmedia.com/leavenotrace

“When civilization feels threatened, starting over in the woods seems not only appealing, but maybe even necessary. Especially when seen though Granik’s discerning eye. How lucky we are to have her work.” – Katie Walsh, Tribune News Service

“Minimalistic, deliberate and largely silent, “Leave No Trace” clings to each word like an endangered species. It demands patience from the audience, but that patience is richly rewarded.” – J.R. Kinnard, Seattle Times

“The heart of Leave No Trace is the rapport between the father and daughter, and McKenzie and Foster are keyed to each other’s movements, perhaps even each other’s thoughts.”- David Edelstein, New York Magazine