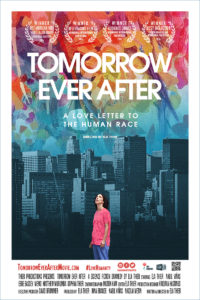 In Tomorrow Ever After Shaina is an historian who lives 600 years in the future. War, poverty, pollution, greed, exploitation, depression, loneliness: these are things that she’s read about in history books. And while she studied this dark period of history, in which money was viewed as more important than people, she has never, in the flesh, seen humans hurting other humans. Until now. While visiting a group of physicists who experiment with time travel, Shaina is accidentally stranded in the year 2015. Here she involves herself with a group of friends who are as lovable as they are flawed. As the harsh realities of their lives unfold, she learns what no history book could have taught her. Old habits, however, are hard to break, and Shaina can’t help but assume that everyone around her is honest, generous, and caring, as she works to recruit the help that she needs to get back home. While most futuristic films depict a dystopia that is even colder and more mechanical than our own, this film takes a bold departure from the sci-fi genre by exploring the possibility of a future in which caring and compassion govern our societies. What if the future of humanity and the planet turns out exactly as we would want it to be? Director and writer Ela Thier joins us for a conversation on her sweet, insightful and humorous rumination on the past, present and hopeful future

For news and updates go to: tomorroweveraftermovie.com

“Built around Thier’s dignity and gentle humor… she emanates charismatic warmth and seems genuinely engaged with the film’s theme of compassion in an era of despair.” – Chris Packham, The Village Voice

“Held up brilliantly its premise …Played with touching insight and natural beauty …[Thier] provided me with a new sense of wonder for my fellow humans.” – E. Nina Roth, Huffington Post

“It is a rare film that insinuates itself so gently into your consciousness, and then opens up like a stealth bomb inside your mind and heart.” – Dorothy Woodend, Alliance of Women Film Journalist