At a time when America is ripping apart at the seams, The REUNITED STATES 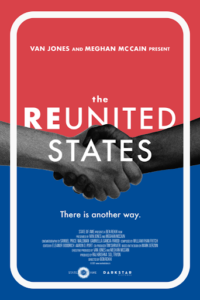 divides. Susan Bro, who lost her daughter when a car drove through a crowd in Charlottesville, and David and Erin Leaverton,  a Republican couple who travel to all fifty states in an RV to find out what divides us, are just a few of the characters profiled in the film.  Each of these bridge-builders have realized that while our divides run deeper than they

ever could have imagined, so does the love and hope to bring our country back together. Based on the book of the same name, REUNITED STATES urges us to consider that everyone has a

role to play in reuniting the country. Director Ben Rekhi and film subject Susan Bro join us for a conversation on why so many people are failing to see our shared humanity, how we all can begin to recognize each other as real people and why it is so important that we respect  each other, even if we do not always agree with each other.

For news and updates go to: reunitedstates.tv

Take the pledge at: reunitedstates.tv/pledge

“As this election has shown, we’re still a nation deeply divided. What makes ‘The Reunited States’ so powerful is that it shows us what it means to ‘bridge the divide.’” – Van Jones

“When Van brought this film to me, I was so moved by it not just as someone deeply concerned about polarization, but as a mother pondering what kind of country my daughter would grow up in. What I love about this film is that it shows us that no matter where you are on the political spectrum – right, left or center – there is a path forward together.” – Meghan McCain

Susan Bro – Susan D. Bro honors the legacy of her daughter and civil rights activist Heather Heyer by empowering others to make a difference in the world by fighting for equal rights for all. Susan is the mother of Heather Heyer and the co-founder of the Heather Heyer Foundation (HHF). Susan launched the foundation to carry on the legacy of her daughter, Heather, a young a paralegal for the Miller Law Group who had a love for all individuals regardless of race, religion or creed. Heather was slain while standing up for social justice with her friends on August 12, 2017 in Charlottesville, VA. The Heather Heyer Foundation is a 501(c)3. Based on her daughter’s motto, “If you’re not outraged, you’re not paying attention,” Susan brings Heather’s legacy alive by sharing a positive, non-violent message and call-to-action that inspires others to fight for social justice and civil rights issues while encouraging dialogue and understanding in our communities.

About the filmmaker – Ben Rekhi is an American director, producer, and screenwriter. He is known for Waterborne (2005), Fun Size Horror: Volume One (2015), and The Ashram (2018). Ben Rekhi graduated from New York University’s Tisch School of the Arts, where he directed and produced a number of films, including The Waste Project, which won the Best Actor prize at the First Run Festival, and Dirty Laundry, recipient of Warner Bros. Pictures Postproduction grant. Rekhi graduated from University of Southern California  with a Masters from the Peter Stark Producing Program. Rekhi has worked on the set of O Brother, Where Art Thou? and shot the behind-the-scenes documentary for  Confessions of a Dangerous Mind. He founded Drops Entertainment and produced his first feature film, Bomb the System, which was nominated for the 2004 Independent Spirit Award for Best First Feature and distributed by Palm Pictures. His directorial debut,  Waterborne, was the runner-up for the narrative audience prize at the 2005 SXSW Film Festival, and Car Babes, which he produced, premiered at the Hollywood Film Festival. Rekhi also served as VP of Acquisitions at Apsara Distribution.  Apsara obtained exclusive Asia distribution rights to Harrison Ford’s  Paranoia. Rekhi directed The Ashram (2016) in India, featuring Sam Keeley, Kal Penn, Melissa Leo, and Radhika Apte. In 2019, he directed Watch List (Maria) in Manila, a crime thriller set in the drug underworld during the time of Rodrigo Duterte‘s  extrajudicial killings. The film was nominated for a Jury Prize at the Seattle International Film Festival.